“Would you like to fly to Oklahoma City and drive a van back to Cleveland for us?” This is what Frank asked me at my desk one Monday morning in October. A longtime client of ARV was moving from the world of Class B to Class A motorhomes and wanted to return his Oklahoma Crimson 170” Extended Sprinter van, named Mayflower II. I responded with an immediate, “I’ll do it,” but Frank insisted that I take a few days to think about it. Wednesday I still said, “Yes,” and shopped for a plane ticket. Friday morning I was on my way.


Mayflower II would be added to the ARV pre-owned units we take in to update and make available to a new owner. Mayflower I, this client’s first ARV, had a layout so spectacular, he didn't change a thing when upgrading to Mayflower II on a newer 4x4 chassis.


Something that I’ll never take for granted about ARV is how helpful employees are to each other. Although I mentioned the trip to only a few coworkers, many stopped by my desk to help me get ready. Within 10 minutes of my initial “yes,” three different people checked that I was bringing a license plate. Another sent me along with not one, but two different screwdrivers to attach it. From there I was handed microphones, a tripod, an insurance card, contact information, and excited well wishes, which all made me feel very taken care of.


At the airport, I wish I had snapped a photo of the TSA worker who took an extra moment to look at my luggage containing an Ohio license plate, a vacuum-suctioned bag of bedding, and an induction saucepan. Once I picked up the van, I skipped the photos suggested by one coworker: a “before” shot of the empty refrigerator and then an “after” shot once I had filled it up. Although the idea was funny, I decided that the contrast between an empty refrigerator and my new supplies of minute rice, a can of beans, and a pack of La Croix would not be interesting. 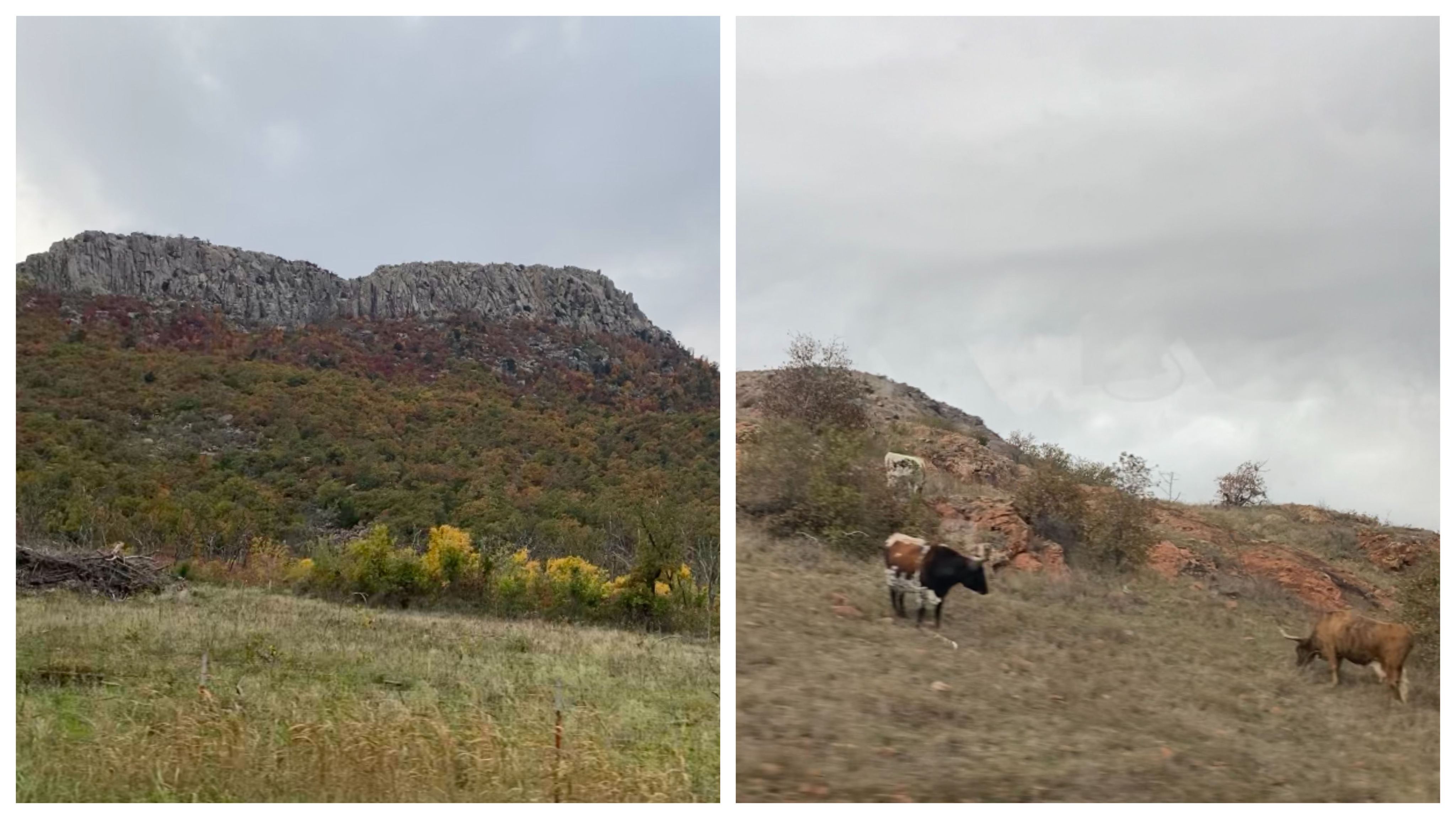 Once I had the van, I passed up seeing the attractions of downtown Oklahoma City and headed southwest to see mountains. Why am I heading southwest, when I have a 17 hour drive ahead of me to the northeast? Traveling, to me, means figuring things out as I go. There are many people, my friends included, who prefer to plan vacations months in advance, book hotel rooms, and plan which restaurants to go to, but I prefer to leave most of that up to serendipity. I wanted to see mountains.


The Wichita Mountains Wildlife Refuge was only about an hour away and fulfilled my quest for mountains and lakes, and added herds of bison and longhorn. When I arrived at the park, I decided to drive up the first mountain that appeared, Mount Scott. The road was winding and both on my ascent and descent I had two motorcyclists trailing behind me to add excitement. 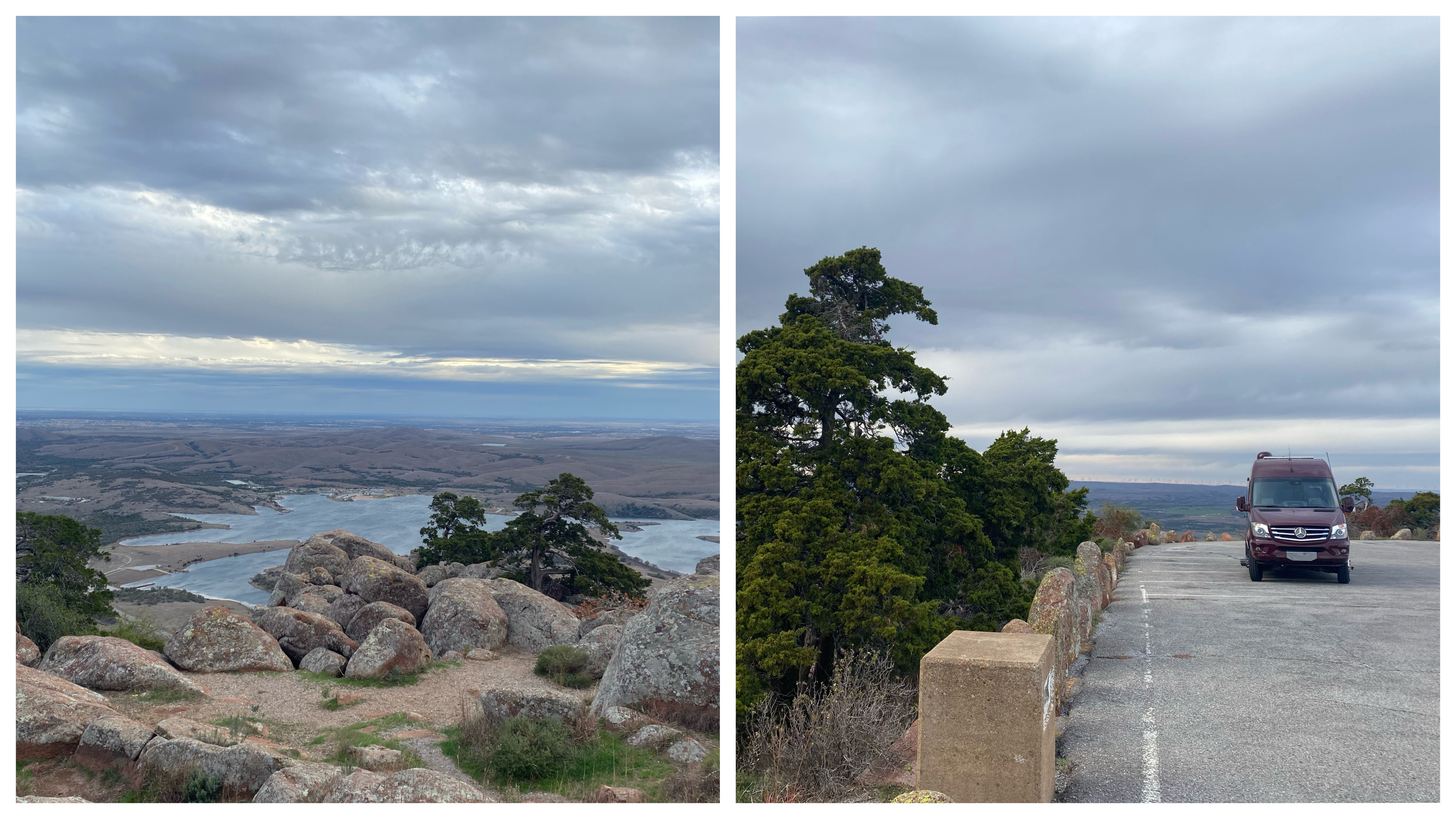 The top of Mount Scott was frigid and windy, so in an effort to warm up I put on my running shoes and jogged around just soaking it all in. Even in this weather, I wasn’t the only one up there, nor was Mayflower II the only red camper van in the lot. If I had known this was going to be such a highlight of the trip, I would have stayed for sunset and cooked dinner up there. However, I had plans to spend the night at a Harvest Hosts farm and I hit the road again, now in the direction of home to Cleveland. 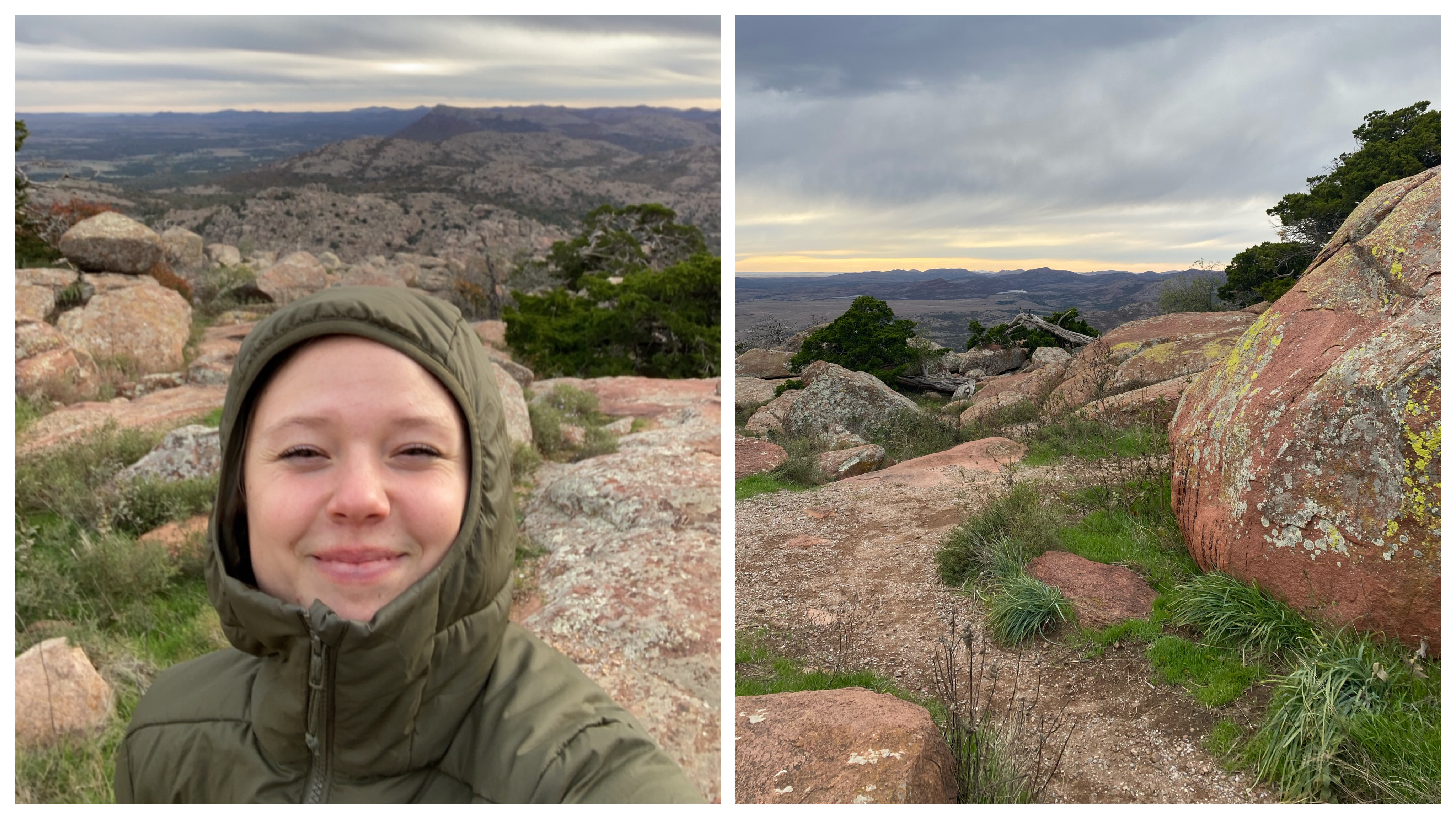 On my first ARV trip about a month ago, I entered the world of iOverlander, the camping app, and this time, I tested out Harvest Host. I booked a stay at a sustainable farm north of Oklahoma City. I arrived around 6pm, right when the daylight was running out, so the host kindly messaged me a map of a few parking spots around the property that I could choose from. Assuming the farm would be more active in the morning, I was looking forward to being surrounded by donkeys, chickens, cows, goats and fresh bread as advertised on the profile. Though, after waking up covered in snow, the animals and I were on the same page about not wanting to step outside, so the farm stand offering seasonal produce and bread would have to do.

I couldn’t help but think about how ideal this camp spot would be in the summertime or on a more relaxed and leisure trip. Van life in the later months of the year is tricky - still doable and pretty outstanding when you have heat - but the limited daylight means you have to really prioritize where you want to be and when. With Harvest Host you’re expected to arrive at the farm or winery during working hours and interact with the owners in some way whether that’s sitting down for a drink, purchasing produce or leaving a donation. I was itching for the ability to quickly stop for the night and get up first thing in the morning, so I opted into spending the next two nights at rest stops. Luckily I felt very safe and had some of the best sleep so far. I’m learning how iOverland and Harvest Host apps are unique and the value in utilizing each for different situations.


Back on the road for my second day of driving, I was drawn to Natural Falls State Park, just off the highway. I brought my lunch with me and ate it at the foot of a waterfall. Although this morning I woke up to snow, now the sun was shining. The sunshine, mixed with the mist from the falls, created a rainbow and illuminated layers and layers of moss. To the right of the falls, water trickled over carpets of moss. Even though this “exit,” was just a stop sign perpendicular to the highway, this stop was a dream. 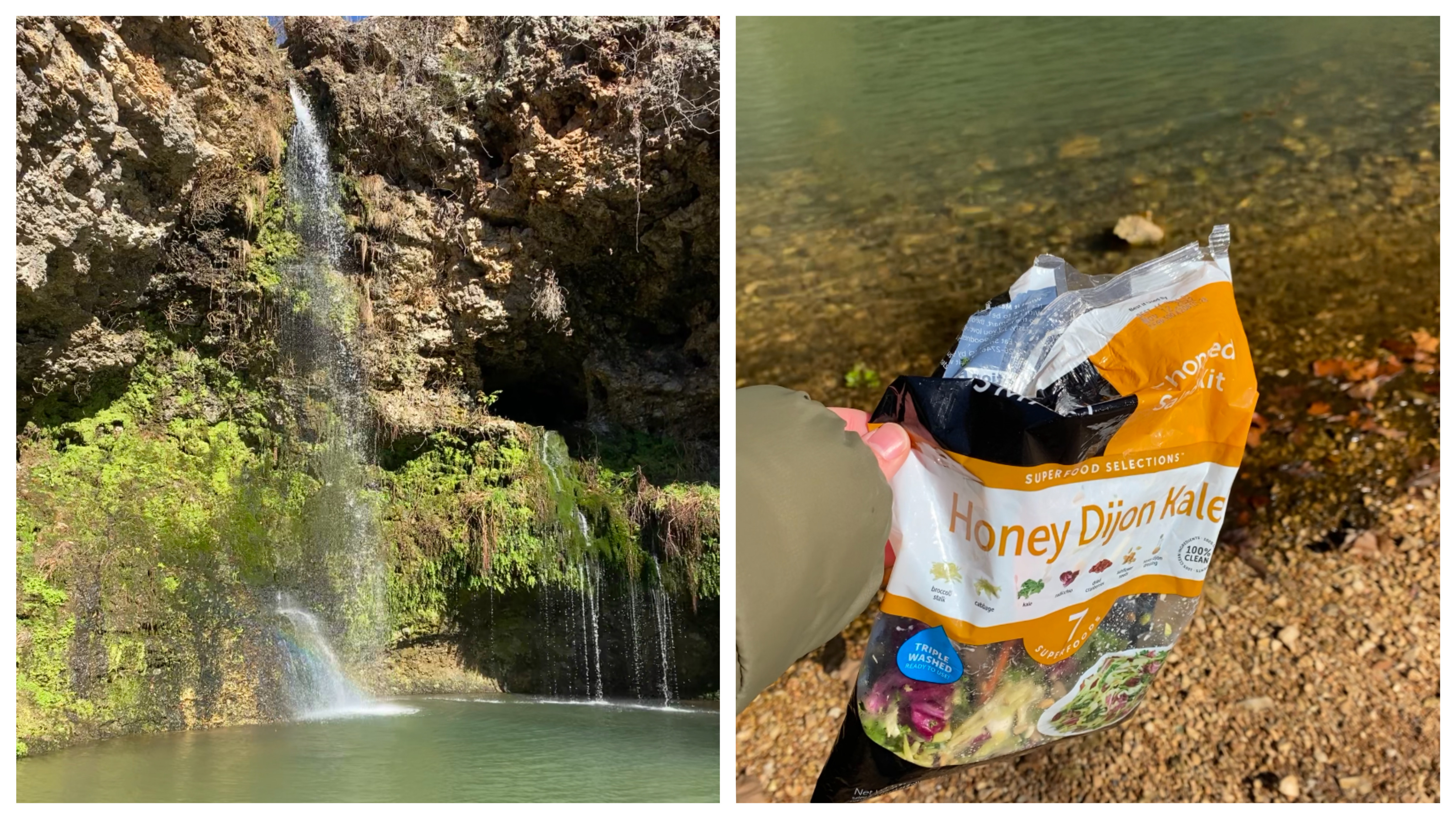 This 17 hour trip broken up into 3 days was pretty manageable, and went by fast as I listened to a blend of music, podcasts, and audiobooks. My next stop was Cincinnati, where I spent time with some old friends from college. Around lunch time, I parked at Alms Park and invited a few friends to hangout and cook inside the van. For dinner, I met another group of friends downtown, many whom I haven't seen for almost a year, so we caught up on each other’s new jobs and new places to live. They all wanted to see the RV and, so on the way out of town, I ended up dropping each one off at their new apartments, like a bus driver.


After one more sleep at a rest stop, I was home and tucking Mayflower II into its cozy spot at ARV with heat and shore power, as my coworkers were leaving at the end of the work day. As I waited for a friend to pick me up, I lounged inside the van on the comfy couch a little longer. I was glad I said yes to this adventure.

Keep up to date with our work.