Suspension Testing in Jasper, Indiana by way of Columbus and Louisville: October 2019

For this trip, as for many others, we are lucky to be able to combine business, family and a lot of pleasure. We are taking a 2017 Sprinter motorhome that is in the Advanced RV rental fleet to Jasper, Indiana to visit Ridetech for some suspension testing, and on the way we are stopping in Columbus, Ohio to attend a niece’s baby shower and to see a Columbus Blue Jackets game with a cousin and his wife. We depart Cleveland at 11:30am in the luxurious Cruzmobile with its high-gloss mahogany interior, huge bath/shower and seemingly endless storage capacity. 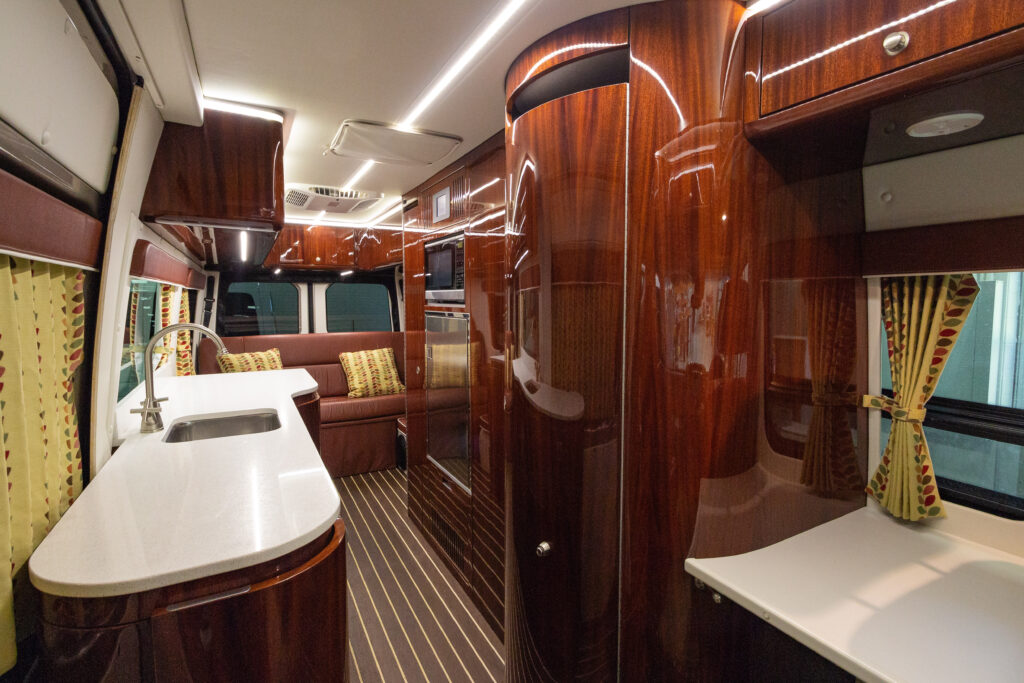 At 2:00PM, Mike drops me off at the baby shower and parks at a close-by park to walk and catch up on emails and reading. After the lovely shower, we head to Merion Village in downtown Columbus, where we park in front of our cousin’s home, deploy the E&P Levelers to get us level on the highly crested brick road and head out walking the two miles to Nationwide Arena to see the Columbus Blue Jackets play the Long Island Islanders. 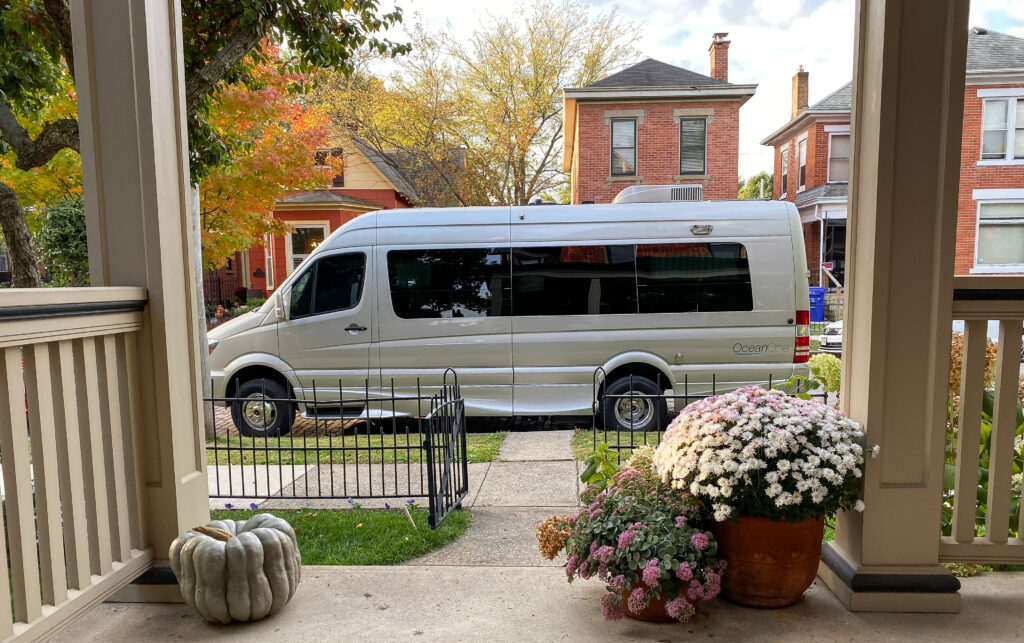 We stop at Due Amici on E. Gay Street for a delicious pre-game Italian dinner. After a good game, with lots of entertainment, including chorus line-like girls skating with shovels to clear the ice, the Blue Jackets lose 3-2 in overtime. We walk back to the van and have a comfortable night “on the street.” 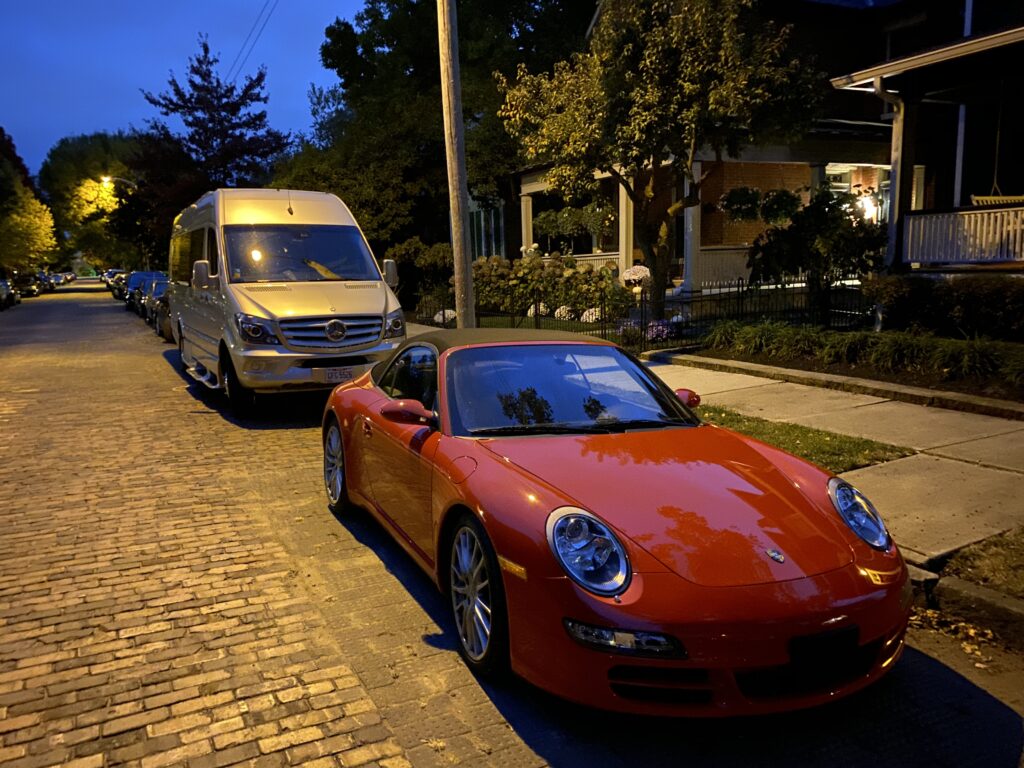 Just before 8AM, we walk two blocks to Fox in the Snow for cappuccinos and sticky buns, and then say good-bye to our cousin and his wife, and head southwest.
Close to noon, I search for “best breakfast in Louisville, KY” and on the east side find Butchertown Grocery. Butchertown is a former gritty meatpacking district that is now “hip, and up and coming,” with repurposed warehouses, restored old Victorian houses and good restaurants and breweries. The brunch at Butchertown Grocery is outstanding. The couple at the next table, who rode bikes here from their hotel, recommends we walk Big Four Bridge and see the sidewalk chalk art fair going on in the park below. 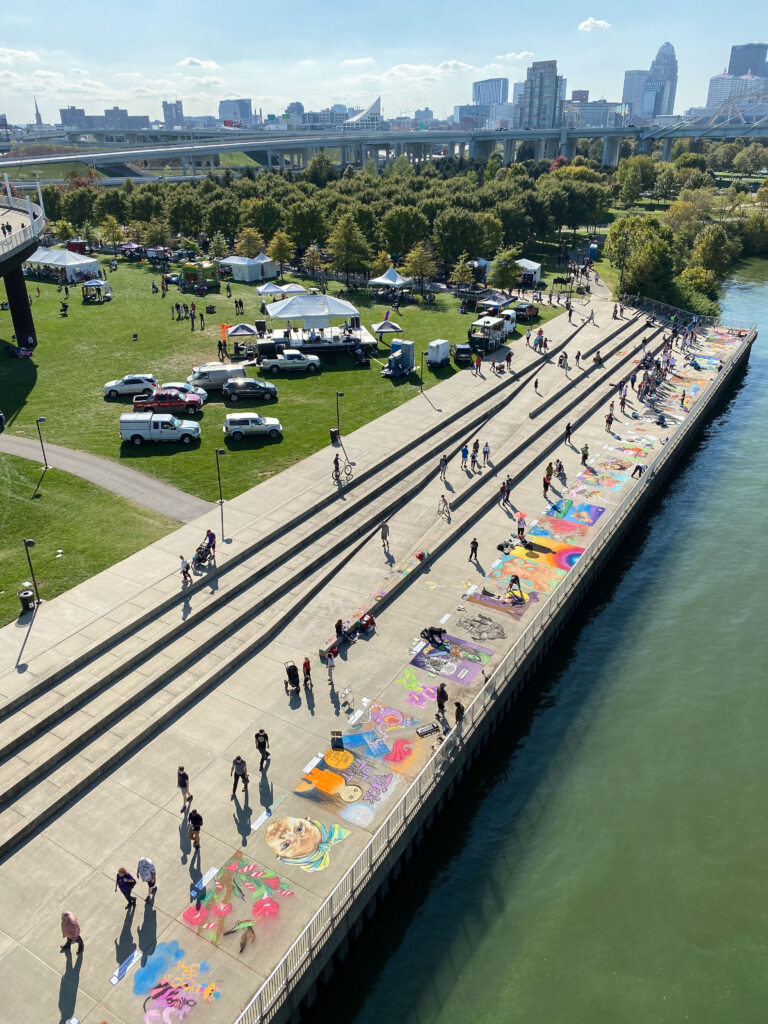 After taking a photo of Cruzmobile in front of the LOVE mural across from the restaurant, we walk about 2 miles through the still gritty part of Butchertown to the Big Four Bridge. We tour the sidewalk art in the park, listen to the rock band, and then walk Big Four Bridge, a former railroad truss bridge recreated as a scenic 2,525 foot walkway over the Ohio River. 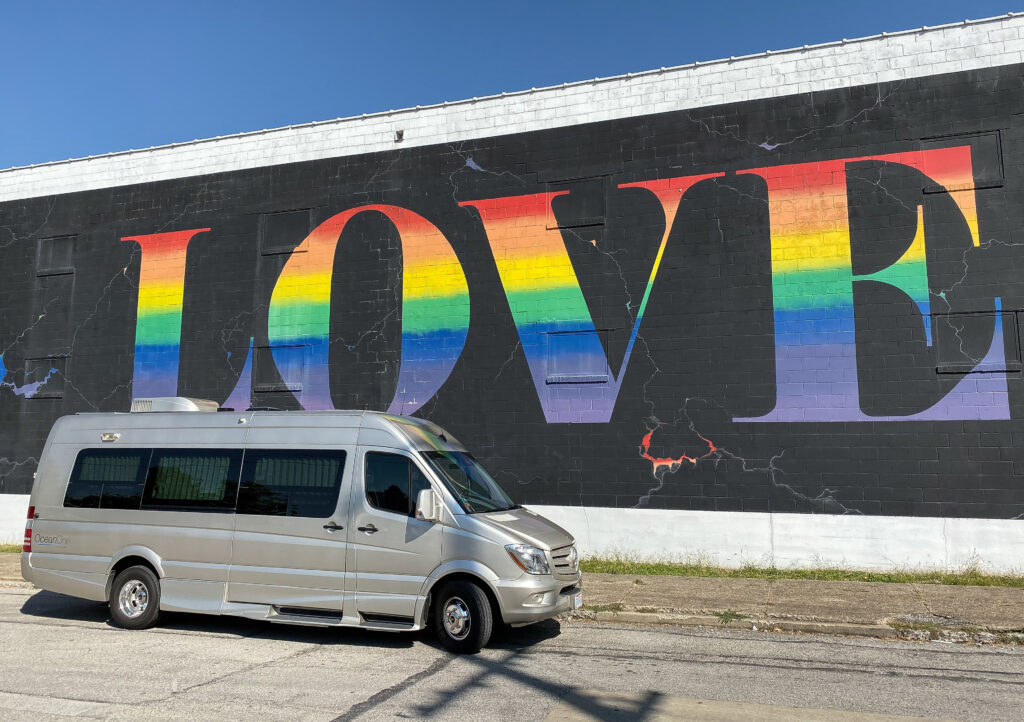 We arrive in Jasper, Indiana about 5:30PM and eat at Schnitz’s Pub, on the patio, overlooking a park below, with paths around small ponds and woods in fall colors. We get the OK to stay the night in the parking lot. After dinner, we walk down through The Parklands, a public park, with paths for hiking and biking and ponds for fishing, where people of all ages are enjoying the last of this fall evening. 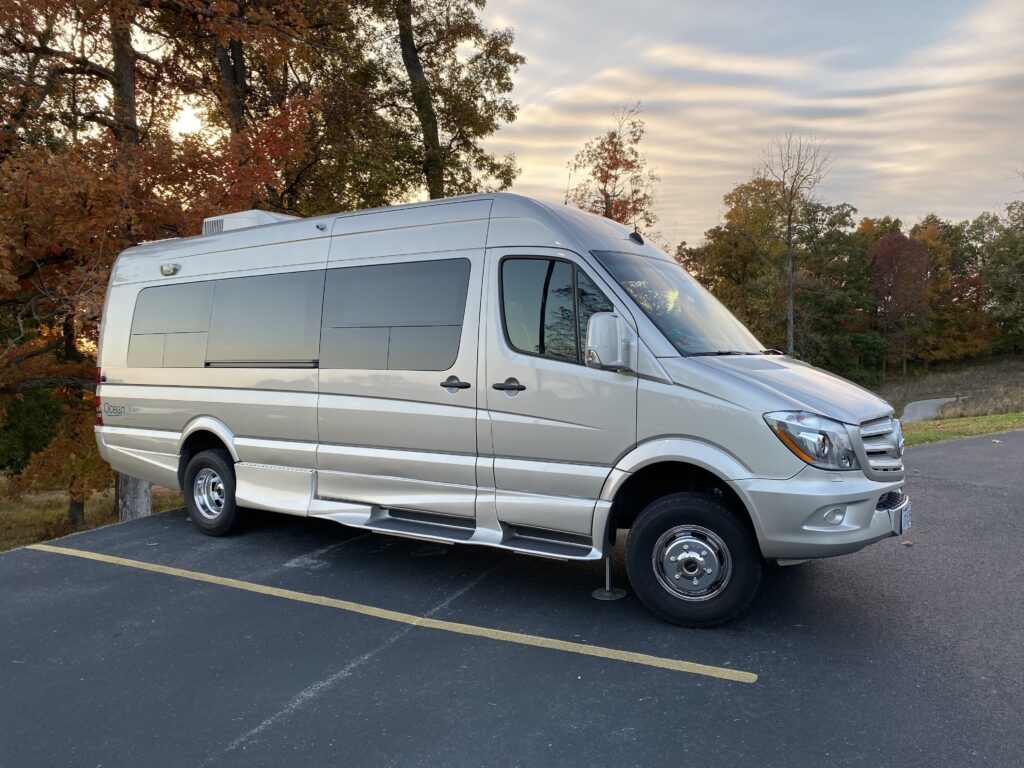 Before sunrise, we walk down through the park again, this time over a lighted bridge, and turn towards town. Another walker directs us to Midwest Café, the closest place for coffee. He says that he is hurrying before the rainstorm starts. This makes us hurry, too, and we arrive at the café just as it starts to rain, thunder and lightning. After our coffee and muffins, Mike searches Uber to find “no cars available.” In a rather loud voice, he asks the guy at the counter, who now is waiting on a line of customers, if there is Uber here. No, and no taxi service either. A woman in line asks where we are going and when we tell her, she says that she is early for work and will drive us. “This is our Uber – the locals,” the counter guy says. We are grateful. She drops us off, we shower and head to Ridetech. 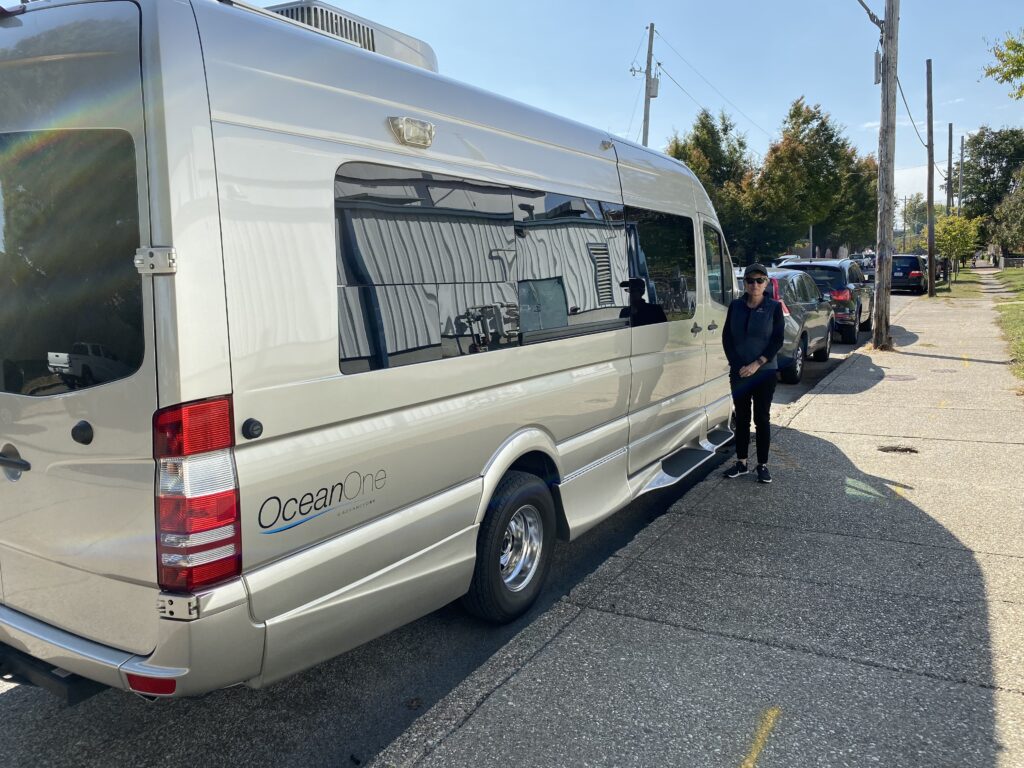 At Ridetech, we meet Greg, the head of sales, who gives us a tour and hands us over to Will, the chief engineer. After discussing the suspension needs of the Sprinter, we take a drive on their test track and then take Will to lunch at Buffalo Wings and Rings. Frank and Mitchell from Advanced RV, who drove Mike’s car down, are at the plant when we return. They all discuss possibilities for suspension upgrades and take Cruzmobile out for another ride on their test track. About 4PM, we leave Cruzmobile for further testing, all pile into Mike’s car and start back to Cleveland. At 5:15PM, I call Butchertown Grocery to make sure they have room for us for dinner, but are told they can’t accommodate us since they have a large party coming in at 7:00PM and they don’t want to rush us. I explain that we are pulling up there now and would be happy to be rushed since we are traveling through. We have an outstanding meal and get another photo in front of the LOVE mural, with all four of us.

About 9:30PM we arrive in Wilmington, Ohio, just north of Cincinnati and stay the night at the Holiday Inn at Roberts Center. 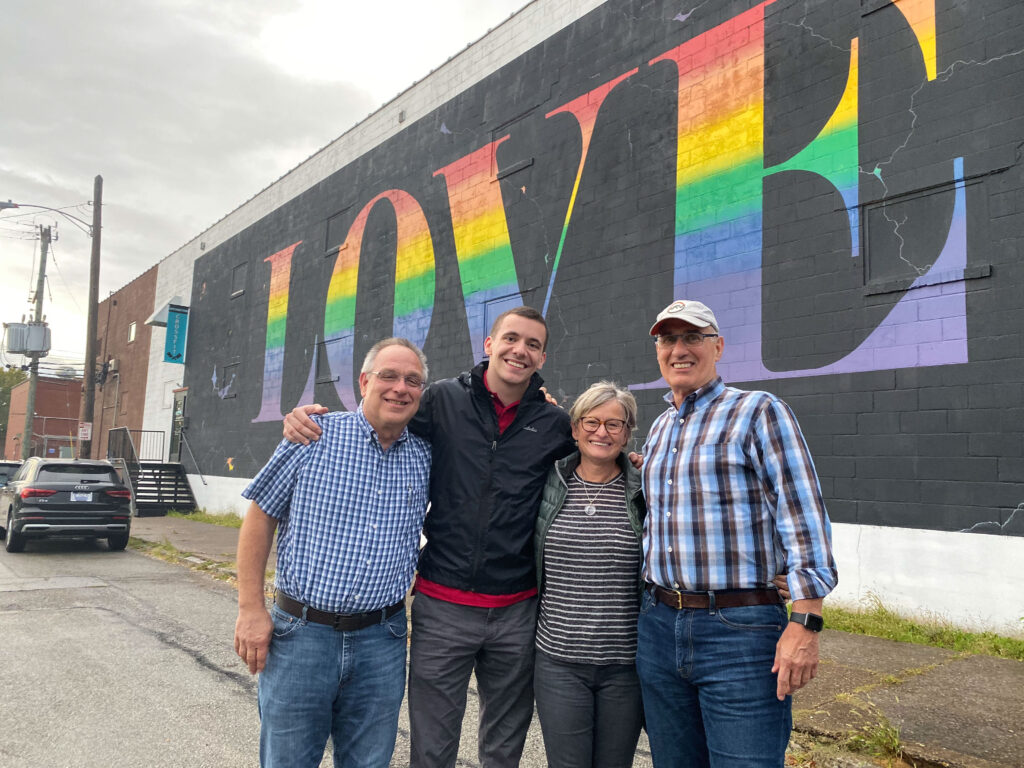 After breakfast at the hotel, we stop at Bush Specialty Vehicles, a truck repair and upfitter in Wilmington. Last March, Mike and I had met them at the Indianapolis Work Truck show, where we made mutual invitations for visits. Close to Cleveland, for lunch, we stop at Slyman’s at Pinecrest off 271 and Harvard for reuben sandwiches. The guys drop me at home and they continue on to the office. Although a trip to investigate Sprinter suspension improvements does not sound glamorous, we had an enjoyable trip. 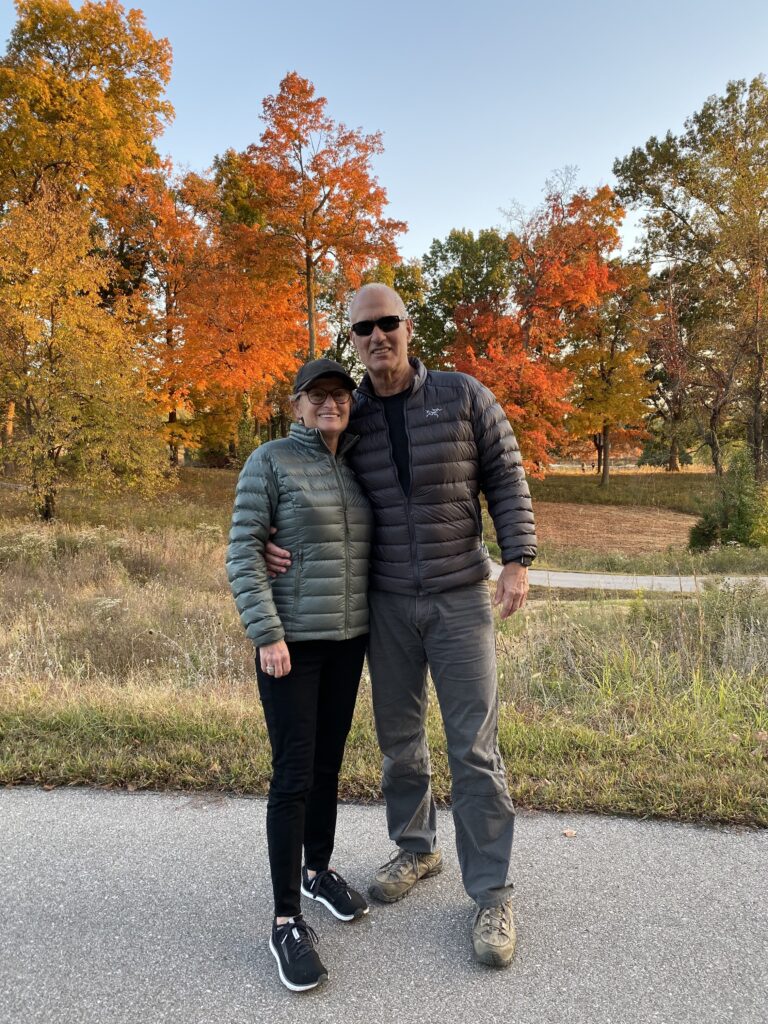 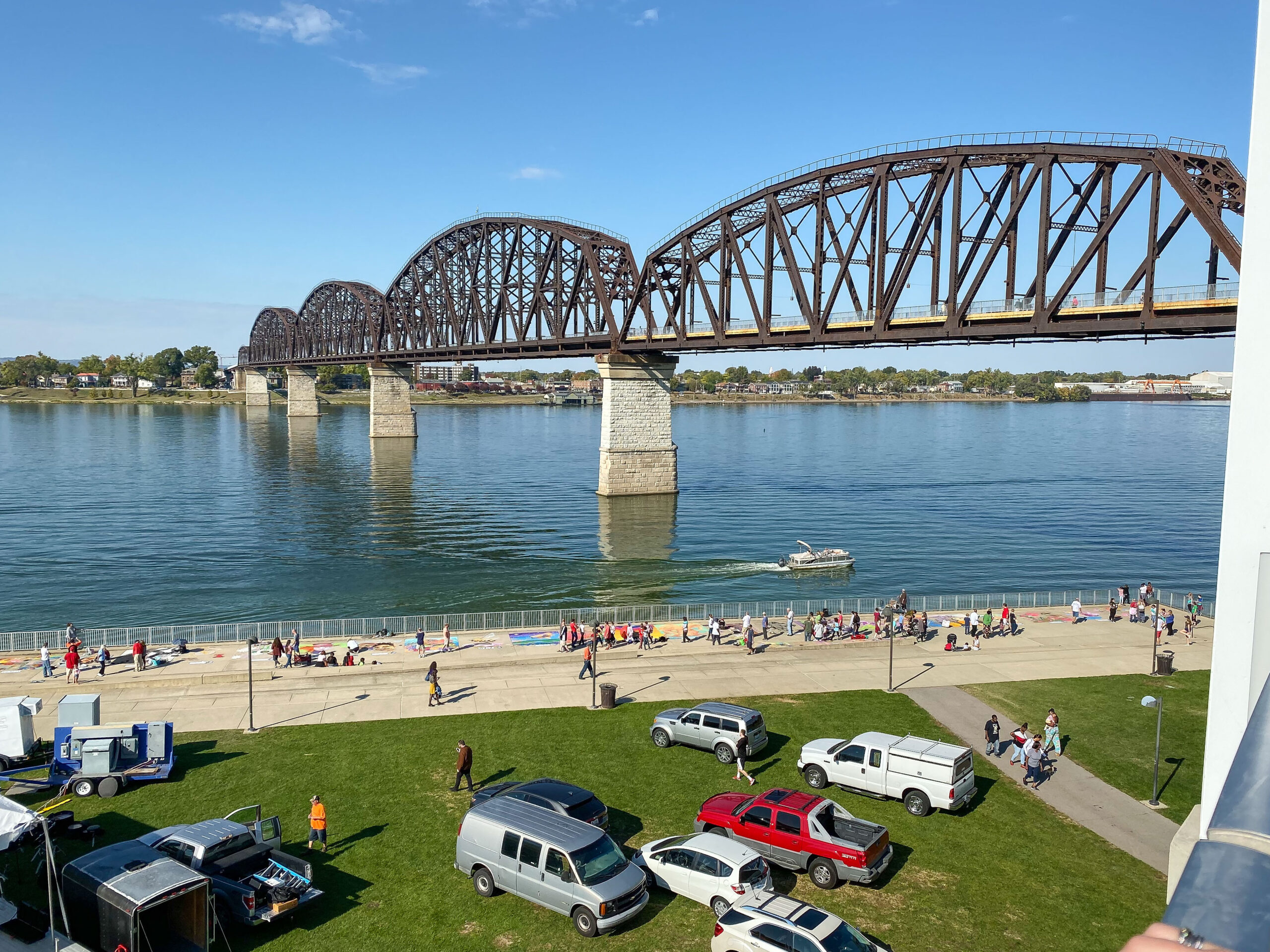