Sophia’s First Road Trip: An Adventure to Florida in Stewie

Eenie, meenie, miney, mo, Stewie is the van to go, and this time, to Florida! Stewie is a 2013 Advanced RV, built on a 170″ Mercedes Benz Sprinter, and a former member of our rental fleet. For several years, Stewie was stationed in Laguna Niguel, California, where he provided adventures for West Coast members of the ARV community. We’ve since brought Stewie back to Cleveland and upgraded him in preparation for the new owners. 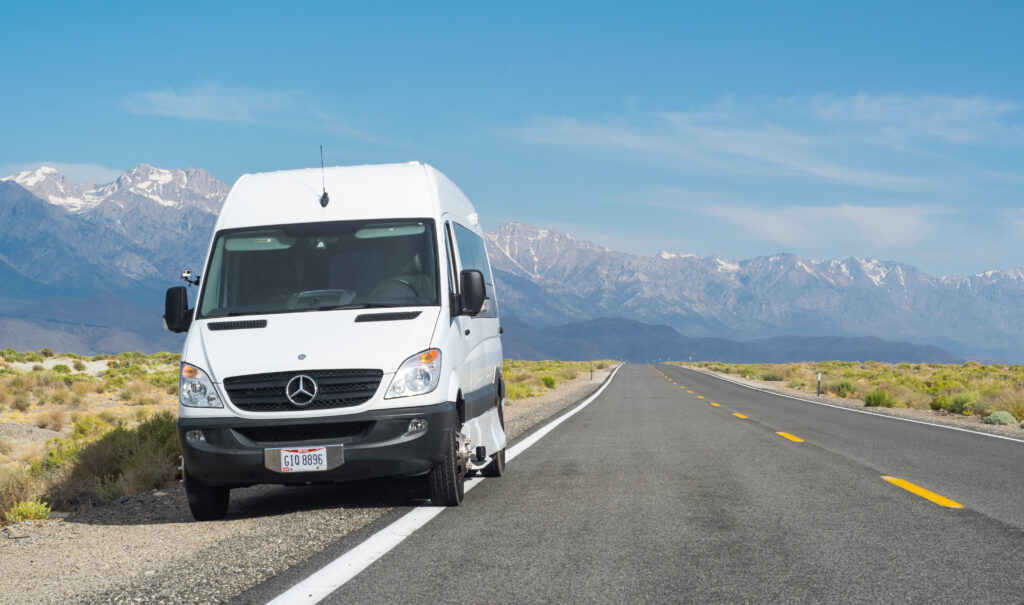 For this trip, Stewie will be transporting not only Steve and me (Brittany), but also our curious, 10 month old Sophia on her first road trip in an Advanced RV! We hope you enjoy reading about our travels.

We decided to go to Orlando in an RV, hoping Sophia would be able to comfortably make this trip from Cleveland, which GPS showed would take 15 hours 58 minutes, without stopping. Of course, with a 10-month-old on board, we would be doing lots of stopping. 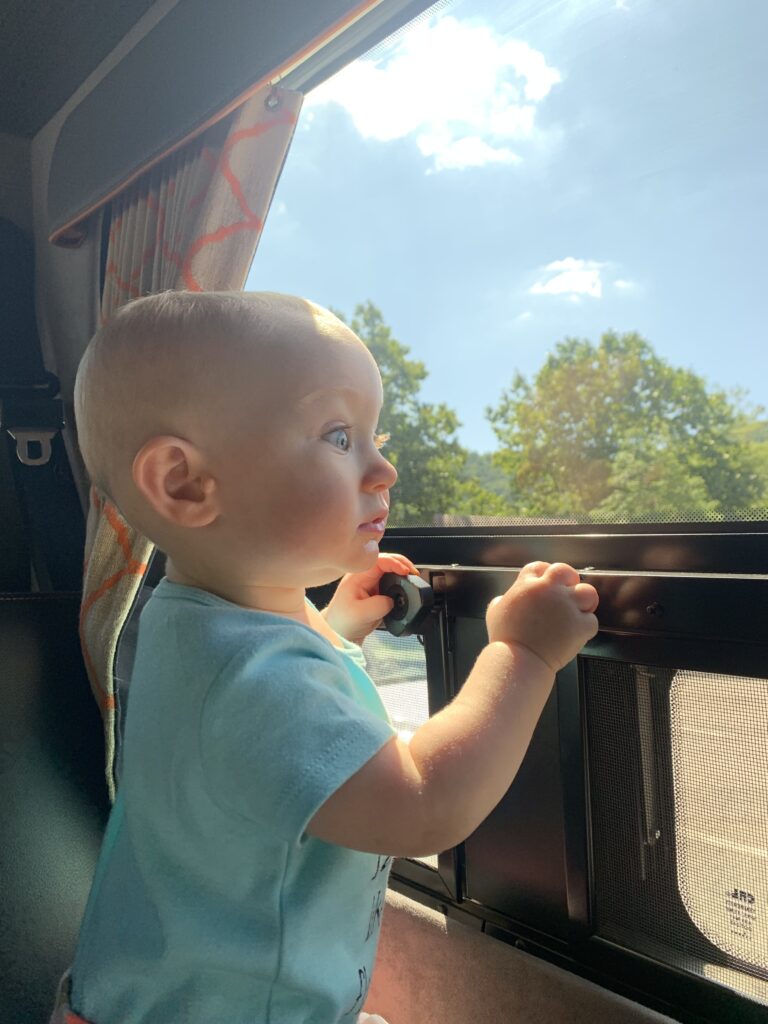 Before our departure, we were keeping our eyes on Hurricane Dorian. Weather reports showed the hurricane was approaching our route, but could possibly clear out the day or day before our travels. We left home around 9:30PM, with the hopes of driving through as much of the night as we could while Sophia slept in her car seat in the back. We stopped at a truck stop in West Virginia, converted the sofa to a bed, and slept for about 5 hours. I slept in the middle, with Sophia tucked safely and comfortably between the sidewall and me. 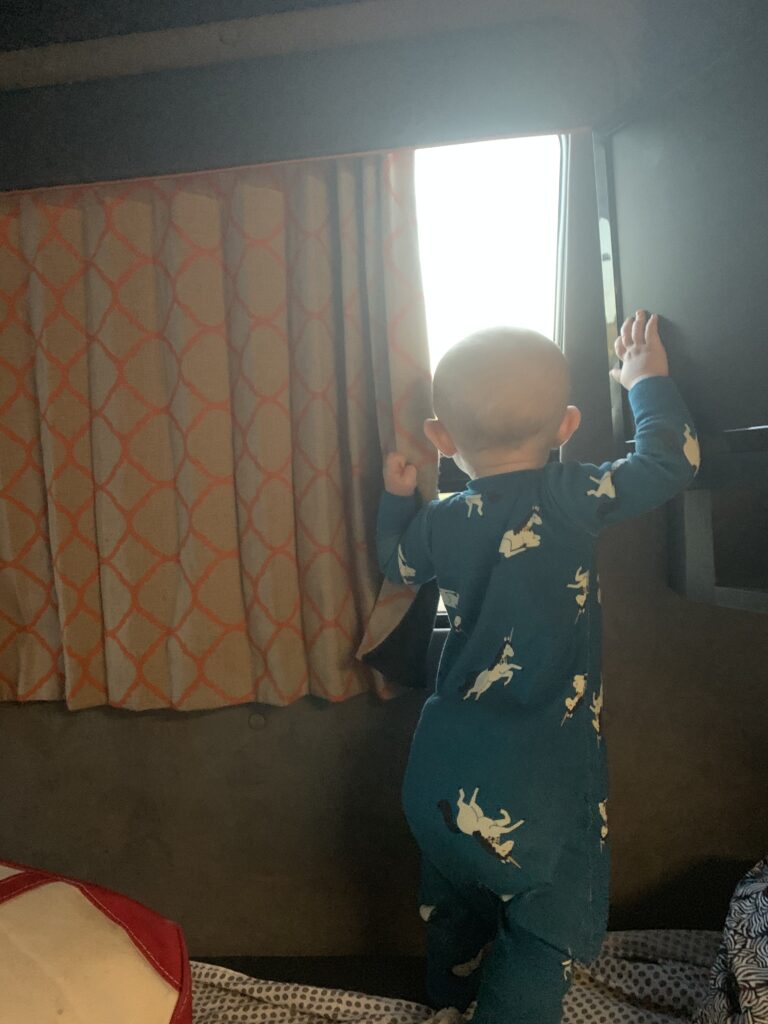 We woke at 7:30 and were on the road about 7:45AM. We took it slow, stopping frequently to let Sophia out of her car seat to move around. This day was the closest we came to Hurricane Dorian, which was off the coast of the Carolinas as we drove through. However, we continued to enjoy sunny skies and minimal traffic. We made it to Orlando at 1:30AM Saturday morning, about 28 hours after we left home. Steve had a sore back, having done most of the driving. This was the longest trip he had driven. 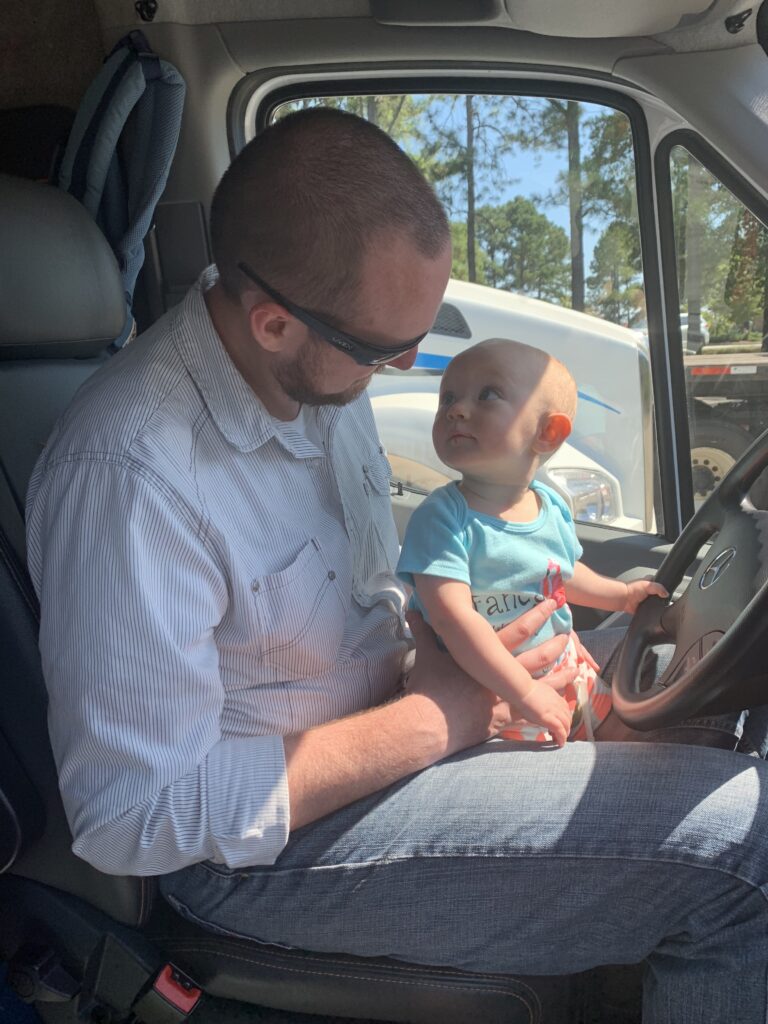 Once in Orlando, we enjoyed walking around SeaWorld, explored the Disney Springs area, and enjoyed ice cream at Icon Park. The Medieval Times dinner we attended one evening was a riot. As we watched knights compete in games and jousting, we were served a feast and drank from goblets, but had NO silverware to eat with. 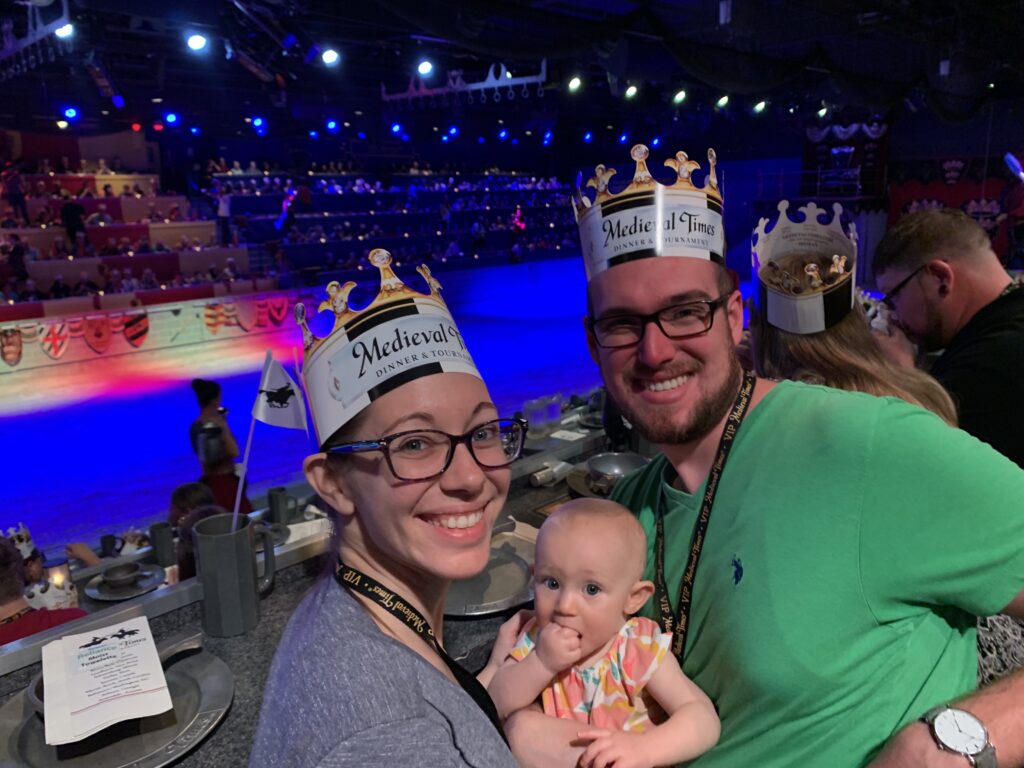 Another highlight was the Maserati Ghibli we rented for a day, which Steve secured using an app called Turo.  During our open-road test drives, we discovered that our little Sophia loves speed. I was sitting with Sophie in the back, and when I told Steve she smiled on take off, he slowed down and tested out the sport-mode pick up again. Sophia’s smile grew and her eyes lit up. She giggled and signed “more”. The sign usually means “more food,” but now it means “daddy faster.” 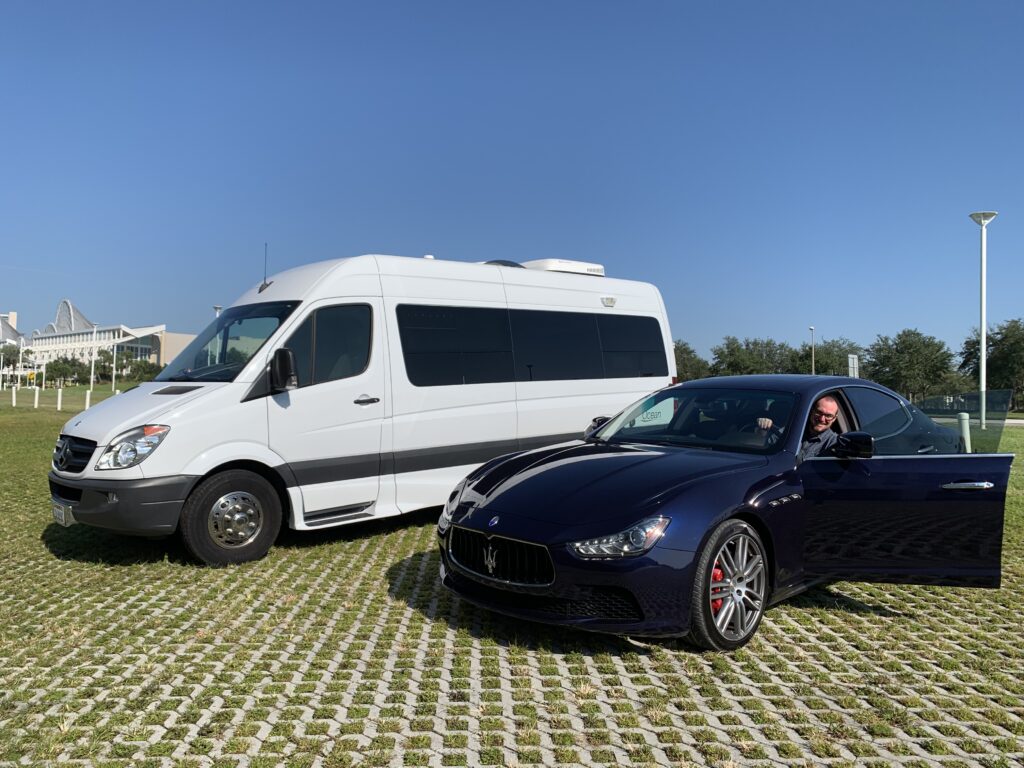 We checked out of our hotel at 11:00AM that Tuesday. We made a point to head towards Daytona Beach, excited for Sophie to see the ocean for the first time. We continued our return, deciding not to rush the drive back, and slept on the road Tuesday night. With Steve driving the entire way, we pulled into home about 4:00PM on Wednesday. 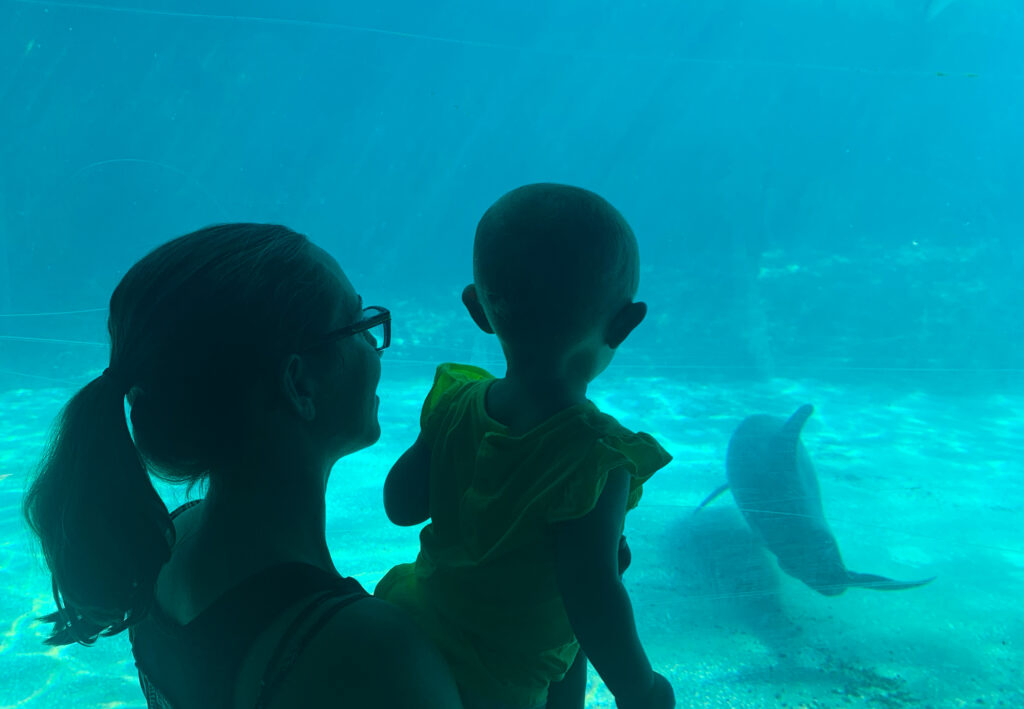 As I reflect on our trip, here are some comments about our Class B travels:

Food:
Stewie’s fridge and microwave allowed us to easily enjoy the home-cooked meals I prepared with my mom before leaving. This decision made our travel incredibly convenient. In fact, we brought so much food that we even had leftovers when we returned home. We enjoyed mozzarella and mushroom quiche, meatloaf, veggies and hummus, fruit, yogurt, chicken and apple/pear sauce. We even had fresh string beans from Mike and Marcia’s garden. Sophia loved it all! We have yet to actually cook in an ARV, but we want to make that a goal for our next outing. 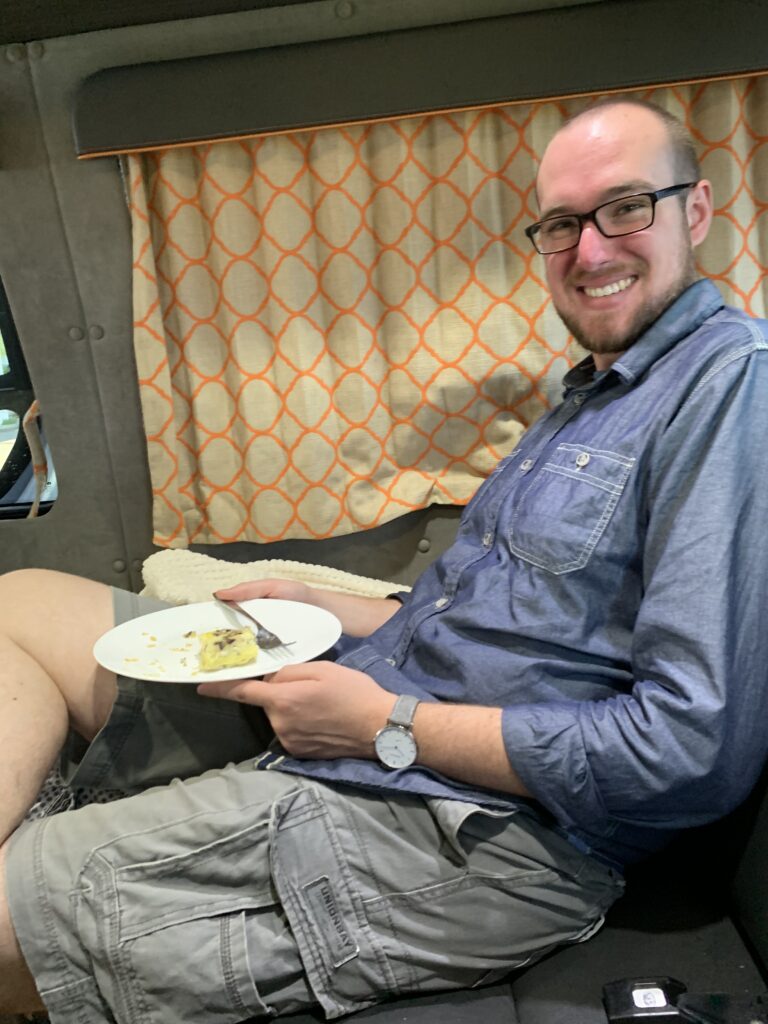 Traveling in a Class B with a baby:
Steve and I were both surprised at how well Sophia traveled in the RV. She was calm, peaceful and happy in her car seat. We quickly learned that her car seat was most secure without the use of it’s “base”. These days, most infant/baby seats lock into to a base that is tethered to the seat. We started with the base tethered to the sofa bed’s center, but we noticed movement with Sophia inside. A few stops in, Steve took the base off and strapped the carrier directly to the sofa. We saw almost no movement at that point and gained complete peace of mind. 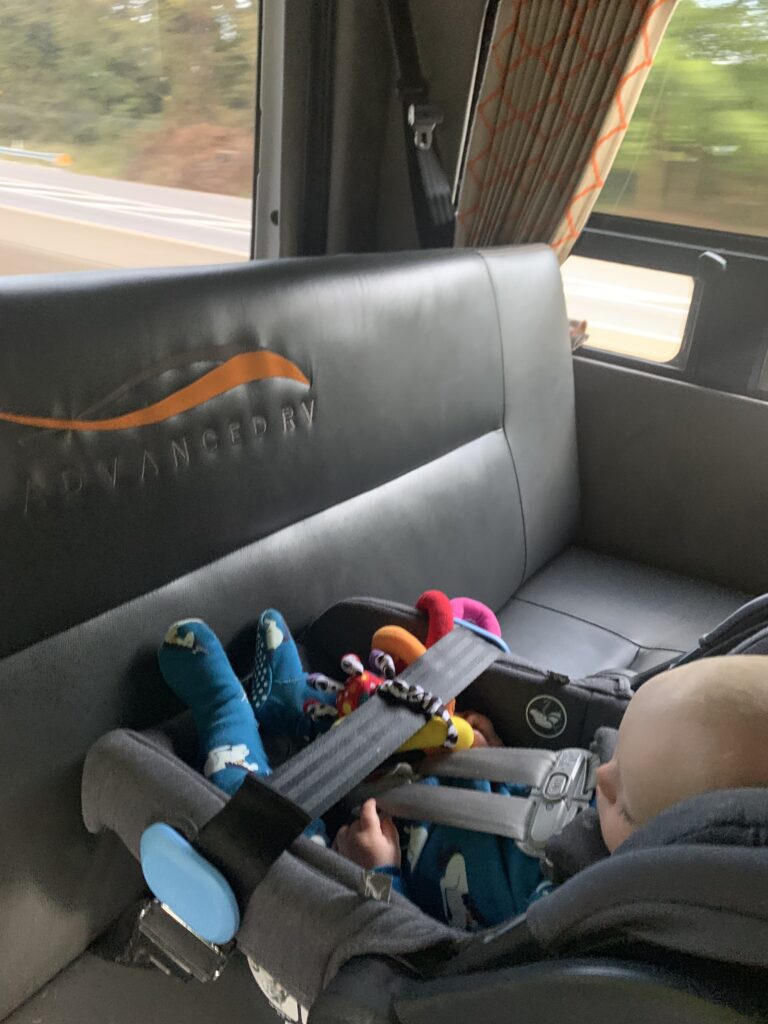 When Sophia was awake in her seat, I sat in the back next to her, helping her play with her toys, reading her stories and nursery rhymes and singing songs. When we weren’t moving and Sophia wasn’t buckled in, she loved playing peekaboo with the blackout window curtains. When Sophia was asleep in her car seat, I moved up front as co-pilot.

Comments on traveling in Stewie:
We were impressed with the ergonomics, adaptability, and craftsmanship of Stewie, one of Advanced RV’s earliest builds. We had to keep reminding ourselves that Stewie was not brand new, although it felt like it. Compared to newer Advanced RVs, however, we found ourselves missing multiplex lighting switches, extra LED lighting in the rear and the E&P levelers – items that have spoiled us and that a new owner could potentially add. 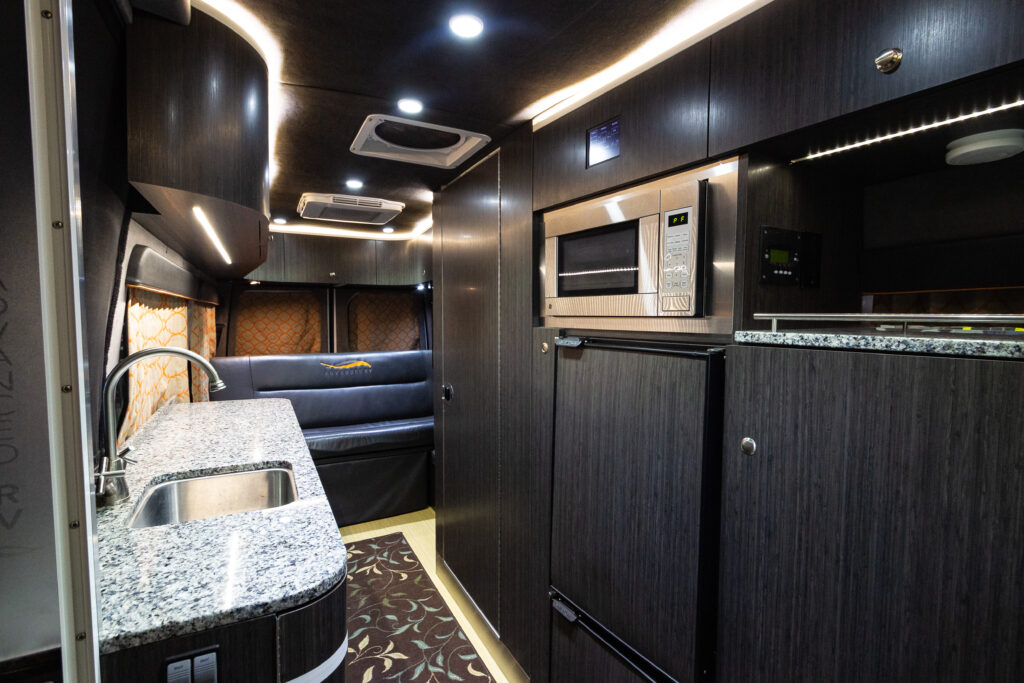 Steve missed the recessed desk in the side of the wardrobe behind the driver’s seat. Stewie has a wider wardrobe for more storage, but Steve and I both would configure the recessed desk if designing our own ARV. One new design idea Steve had was an “end table” to serve as a snack stand or tray between the driver and passenger seats.

Another simple addition we would recommend is sofa bed armrests with cup holders. When I was belted in the back next to Sophia, I kept leaning to my side hoping to find the armrest for support and a cup holder for my drink. Additionally, we would recommend adding a footstool in front of the passenger seat for 5’1″ travelers like myself. 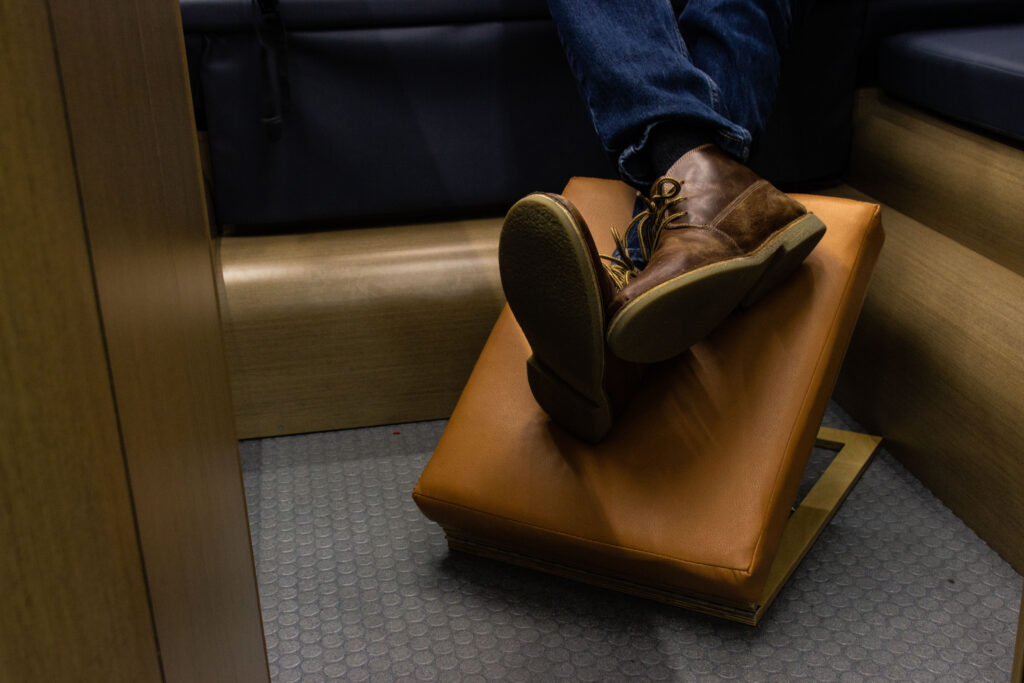 The only other design element we missed was the articulating twin beds, but for our family now, the sofa bed with seat belts is the way to go. We also would have liked auto-dimming mirrors and a better place for your phone on the dash, all features in the 2019 Sprinters.

A general travel courtesy I’d like to share is an idea Steve had one morning after we had parked at a truck stop. Steve recommends that small RVs park towards the rear of semi-truck parking spaces, instead of pulling all the way forward into the spot. By doing this, truckers would more easily see which parking spaces are open, instead of pulling into a spot and finding a small RV ahead of them in the spot. #CourteousDriving #MayWeAllBePatient #BeAwareAndKindOnTheRoad 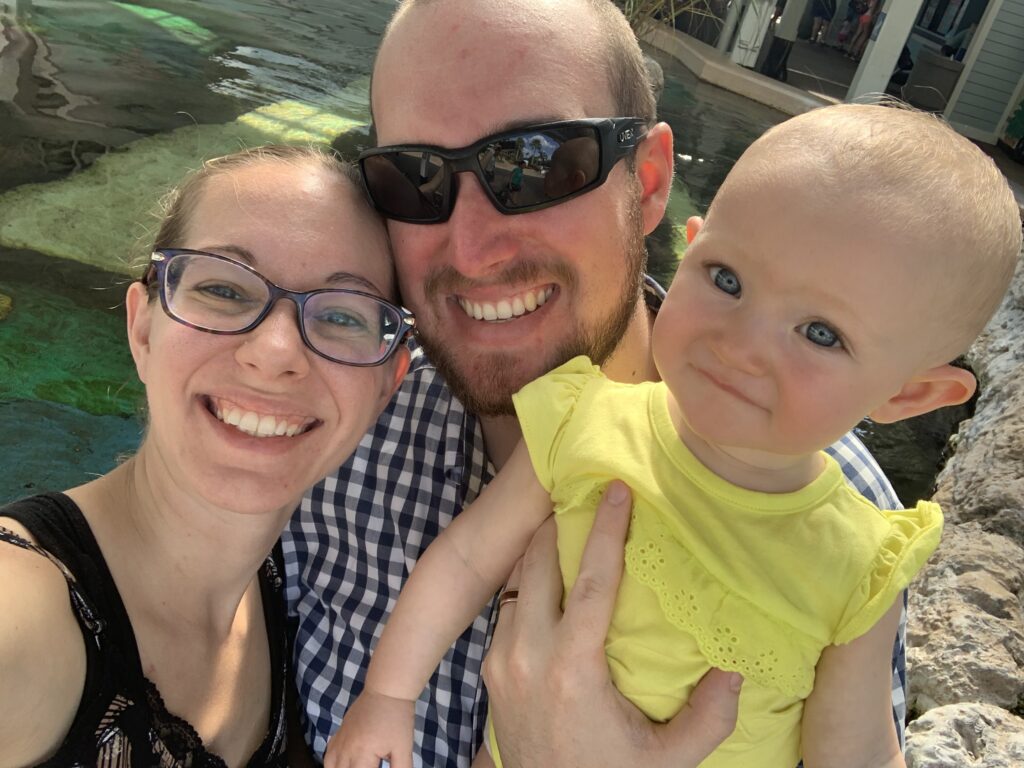 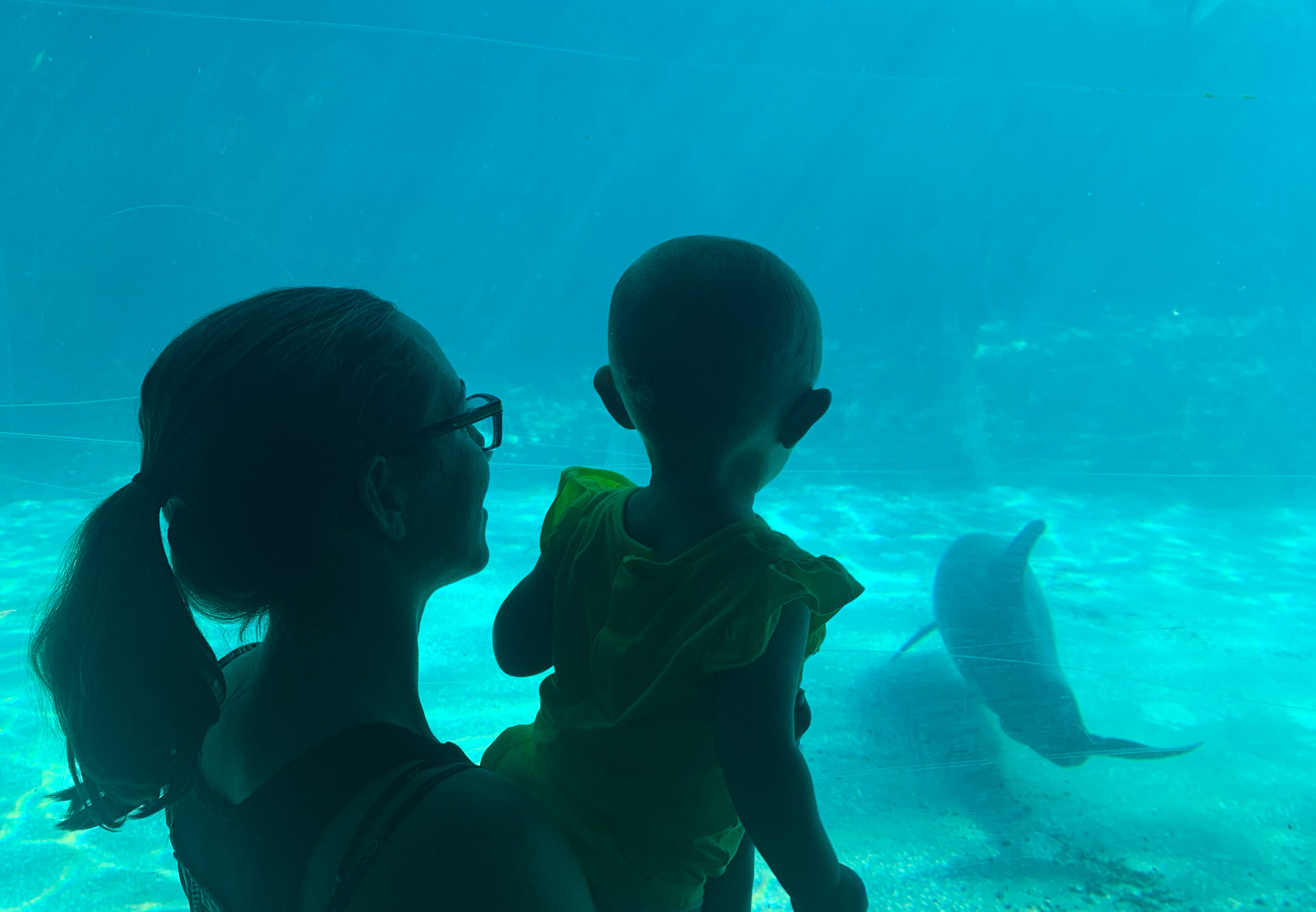