Cross-Country Trip: Cleveland to Los Angeles and back: Part 1 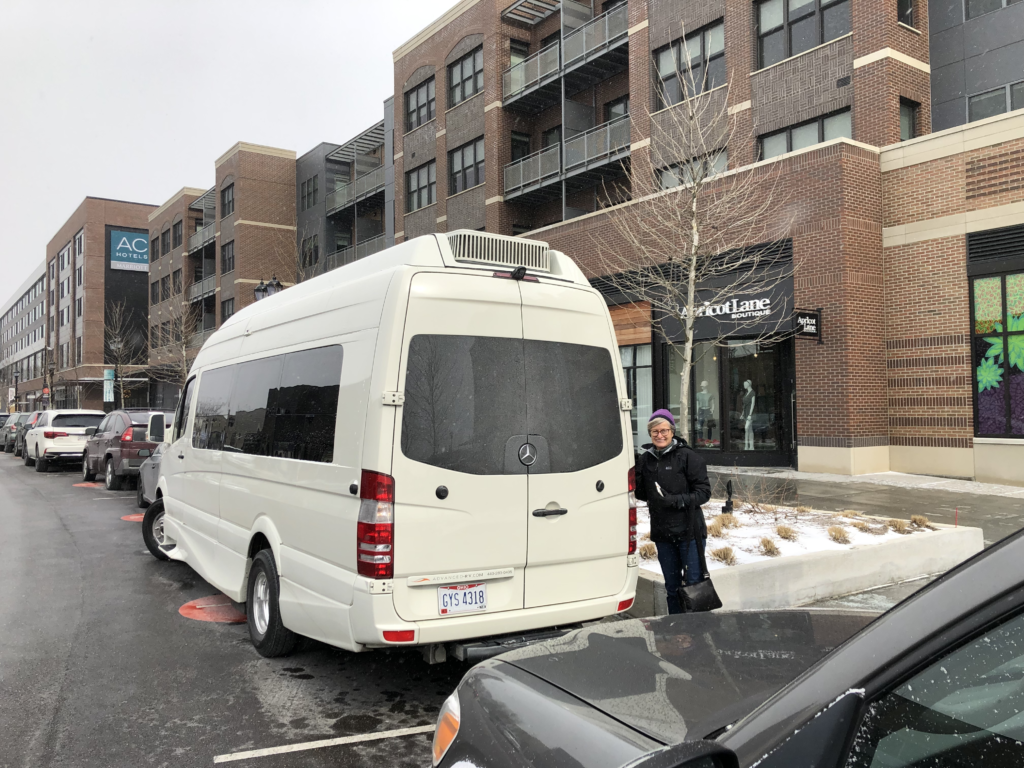 About noon, we leave Cleveland where it is 13 degrees F. and snowing, with predictions of cold weather across our route west for the next week.  On this Leg#1 of a cross-country trip, we are driving Escape to the Work Truck Show in Indianapolis, then on to visit another custom RV builder, Space Craft, and then to the RVX Show in Salt Lake City.  After that show, on Leg #2, we will continue driving Escape on to California, where at the end of March, near Los Angeles, our kids and grandkids are meeting us for a celebration of Mike’s and my 70th birthdays.  Leg #3 will include our stay in California and our trip back home to Cleveland.

We arrive in downtown Indianapolis and park in front of the Hyatt, which is connected to the Indianapolis Convention Center, where the Work Truck Show is held.  Mike talks with the valet and we get a prime spot for the camper in front of the hotel. We deploy the automatic E&P hydraulic levelers to create a level and stable campsite on the sloped hotel exit drive.  We register for the show and settle into our prime spot “room” for the next two days.

Last night, the temperature dropped to single digits, but we stayed warm.   We tour this huge show, logging 12,000 steps and almost 6 miles. There are many interesting exhibits and we find many opportunities to cooperate with suppliers and other RV builders.  About 4PM, we join the Mercedes Benz cocktail party and enjoy seeing many Mercedes Benz contacts and friends. 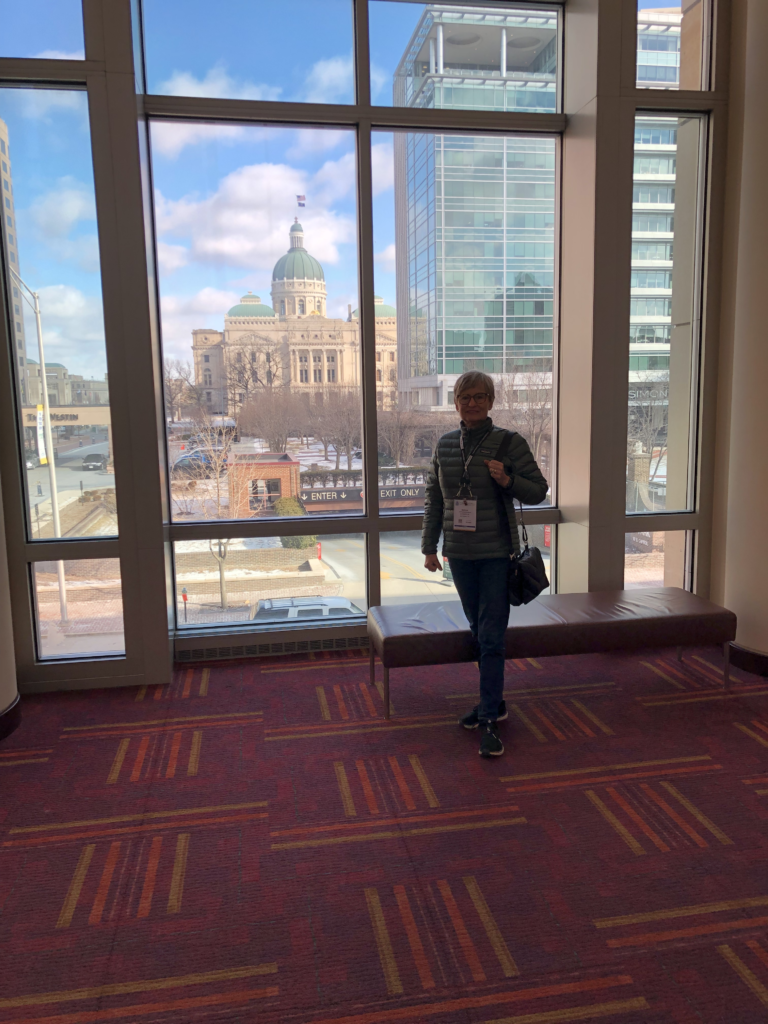 We have breakfast with two friends from VB Air Suspension and head west mid morning.  At St. Charles, Missouri, west of St. Louis, we stop for a walk and a workout at Orange Theory, a gym we have joined near home, with outlets across the country. We stop at a rest stop for dinner out of the camper (soup and salad fixings from home) and then continue for another hour to be close to our morning appointment at SpaceCraft in Concordia, Missouri.  A truck stop suffices for overnight.

After smoothies for breakfast – spinach, berries, almond milk and protein powder mixed in a small Bullet blender – and coffee from MacDonalds, we drive the last hour to Concordia, about an hour east of Kansas City and find SpaceCraft not far off I-70.  In January, we had met the owner at the Florida SuperShow and were curious about the operation of another custom RV builder. During a tour of the plant, Mike and Wyatt discuss mutual business and technical issues.  By building beautiful, large trailers, some towed by semi-tractors, SpaceCraft serves an unusual customer base, including circus and carnival communities. After the visit, we park in Concordia for a snack from the camper and a little “catch-up” time on our computers.

Mid afternoon, we meet our friends from Kansas City, Jim and Linda, at the Steamboat Arabia Museum in the Kansas City River Market.  A client and friend, Sue Valentine, had told us about her parents and their friends, who thirty years ago, discovered and excavated a fully loaded steamboat that sank in the Missouri River in 1856, and was subsequently covered by 50 feet of silt.  After carefully excavating it and its contents, they established a museum to commemorate its history, depict the excavation process and display its artifacts. Sue’s parents, Jim and Joan, gave us a personal tour, explaining how they were captivated by the challenge of excavating the Arabia, spurred on by discoveries of barrels of intact English china sets and other treasures being carried up the Missouri to the frontier.  Separately, Jim and Joan are excellent storytellers, but together their humor and depth of information is multiplied. They learned how to preserve the fresh water finds and personally set up this museum, created in the footprint of the steamboat, with ship railings and an operating replica of the paddlewheel, actual anchor and steam engine drives. The only loss of life was that of one mule, whose bones and harness have their own display.  The artifacts are arranged as though the viewer is wandering through a store of pre-Civil War tools and household items, including complete outfits of clothing, thousands of shoes and boots, and innumerable buttons and beads, plus still edible jars of pickles.

For an early dinner, we go next door with our friends to Brown and Loe and have a good restaurant meal.  Mike and I drive another two hours into Kansas and stay at a truck stop.

We get an early start, with temperatures in the 40’s and winds at 35 mph, gusting to 55.  West of Hays, Kansas, we stop at the tiny Walter P. Chrysler Boyhood Home and Museum in Ellis.  Born in 1875, Walter, as a 13 year old, worked with his father and older brother to build this small, frame house.  About then, Walter built his own toolbox and started working for the railroad, wiping down steam engines. After early work years for the railroads, he switched to automobiles, working his way up through Buick and starting Chrysler in 1925.  Living on Long Island, he directed the building of the Chrysler Building in New York City, completed in 1930.

We enjoy these random historical glimpses as we work our way across the country. 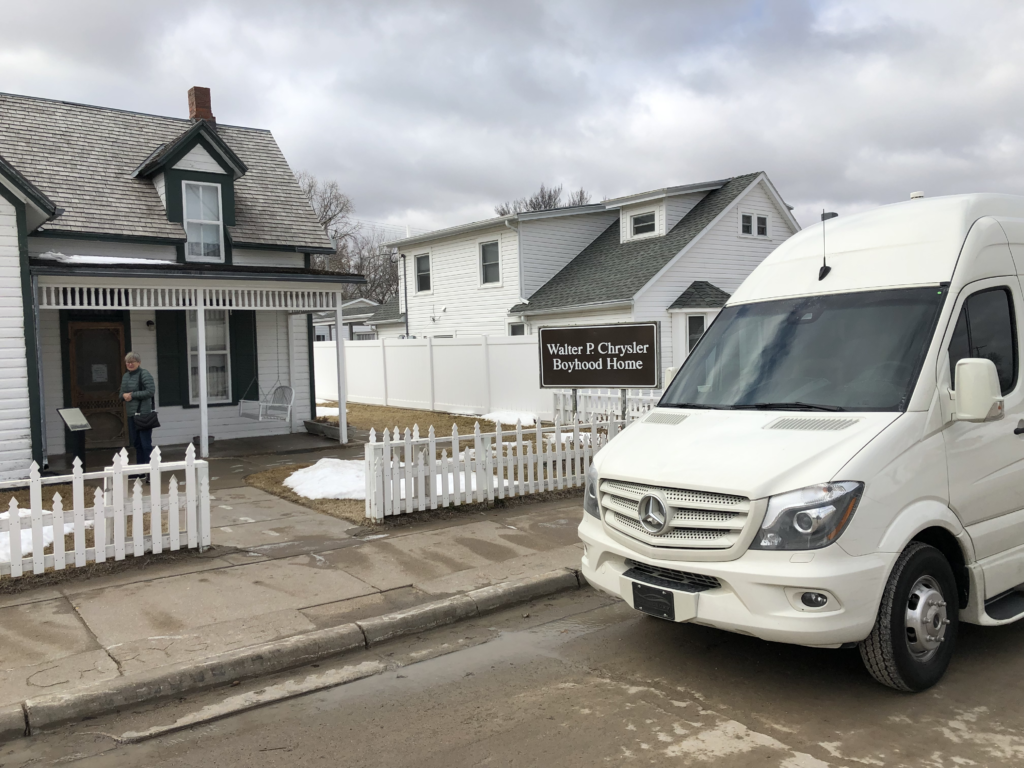 Back on I-70, we continue to be whipped by strong, cross winds.  Almost to Colorado, in Goodland, Kansas, we stop at the High Plains Museum, located in a modest, one story building. It holds many local artifacts, like an early model of a helicopter, which never flew.  A photography show from a local photographer titled “Considering the Commonplace,” notes that the focus is on the beauty in Kansas that tourists going 70mph miss.  Reflecting on “decay and renewal,” the photographer shot common things, such as a freshly painted door on a decaying house, newly painted lines on worn roads and signs, and a new awning on an old bar.  We come out of there feeling renewed ourselves.

On the west side of Denver, we meet a friend of one of our sons for a beer in a newly, gentrified neighborhood.  In Golden, we park for the night in the parking lot of a grocery store next to an Orange Theory gym, where we will work out in the morning.

After our workout at Orange Theory and smoothies in the van, we continue west on I-70.  Around Vail, we wait for about an hour, while crews finish cleaning up from an avalanche a few days ago.  We push on and then notice a sign in Utah saying, “Next service 42 miles.” There was no traffic, but then after the Rt. 191 junction from Moab, we notice a Ford Transit camper slowly coming up on us.  They pull up next to us and it is Mike and Jennifer Wendland, also on their way to the Salt Lake City RVX Show.  We decide to have dinner together at Green River. We all pull into the KOA there and we dump and refill our water, but the restaurant there is closing, so Mike and I go on to a truck stop and they stay at the KOA.  We are all glad that we have our own food on board in this remote area. I thaw out pulled pork from home for sandwiches and fix a salad. 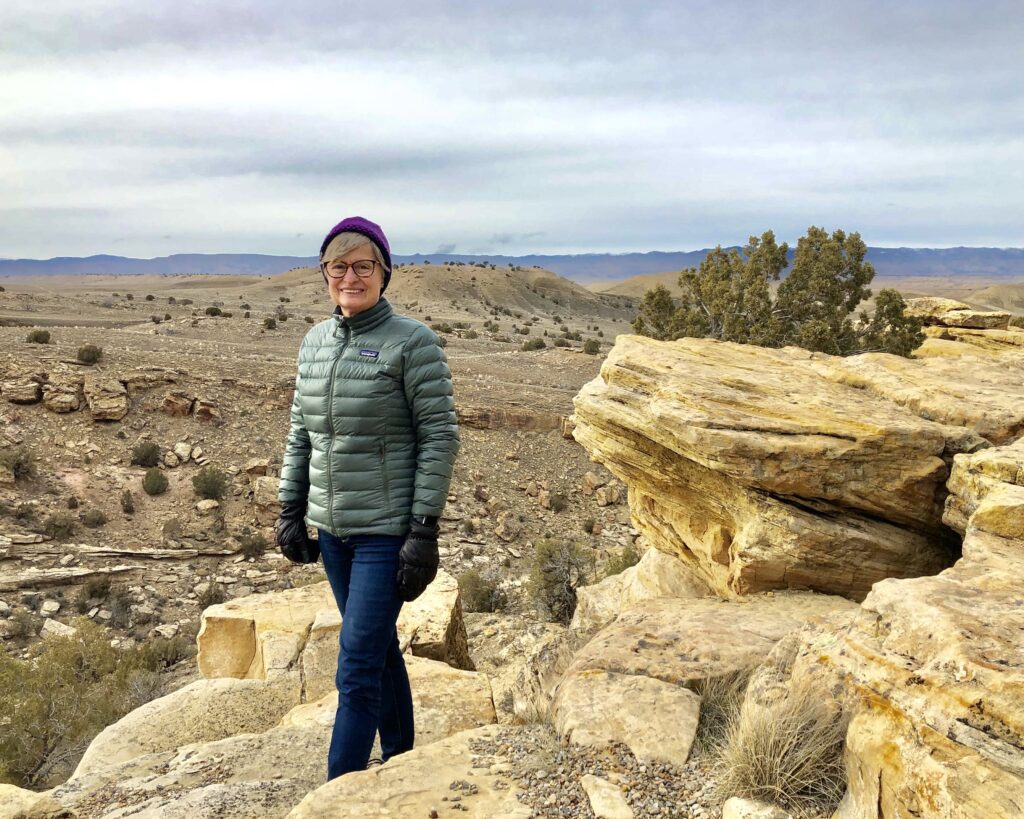 We take scenic Rt. 6 North and connect with Rt. 15 into Salt Lake City.  We find a public parking lot across from the Radisson, a few blocks from the Salt Palace Convention Center where the show is.  The attendant tells us it is $5.00/day, but if we go out and come back again after 7:00PM, it will be $20, since it is parking for the Jazz game at the Vivant Center across the street.  We stay put. We walk over to the Visitors Center, register for the RVX Show and go to lunch at Blue Lemon in the upscale Center Creek Mall. We walk around Temple Square and then walk to a great grocery store, Harmon’s, a few blocks away.  Back in the van, we microwave our new food purchases for dinner and get to bed early. Although the parking lot fills up for the Jazz game, we have a quiet night and finish Ozark, the dark TV series we’ve been bingeing on.

In the morning, we go out and get the camper washed and fueled.  In the afternoon, we attend the opening of the RVX Show and make our way around the whole show.  We get to bed early again for a quiet night in the parking lot.

In the morning, we go back to the RVX show and follow up with several people we missed yesterday.  We meet Mike and Jennifer Wendland and Josh, their IT person, for lunch back at the Blue Lemon. About 3:30PM, we head out, stopping again at Harmon’s, the grocery store, before we set off for Capitol Reef National Park.

This ends Leg #1 of our trip and our week of formal work commitments, appointments and deadlines.  We now have a week and a half to explore Utah and California National Parks, which will constitute Leg #2, March 13 – March 25.  On March 25, we meet up with our kids near Los Angeles for a birthday celebration for Mike and me. The five day stay in California, plus our trip back home to Cleveland, will constitute Leg #3 (March 25 – April 8, 2019).