My wife and I arrived at Advanced RV’s new headquarters Friday morning at 9:30am for our introduction to Baltas Vilkas, White Wolf in Lithuanian, for training as first-time owners of an RV and picking up of our just completed EcoRanger. We were greeted by Tricia and Viki as to be expected and the next person to greet us was Mike Neundorfer with his infectious smile. Brittany would have been present but she is in the last days of her own configuration process with her own mini me due any day now. Janice would greet us later in the day as she was gathering our dropped shipped items together such as the RV Superbag ready for our maiden voyage that night.

Walking around the corner partition in the new headquarters we laid eyes for the first time on our new Artic White EcoRanger sitting cleaner then it will ever be again. Frank was going to spend the day with us explaining systems and demonstrating hands on operations, but first Jody made us the official owners with title transfers and making sure the paperwork was official with DMV. 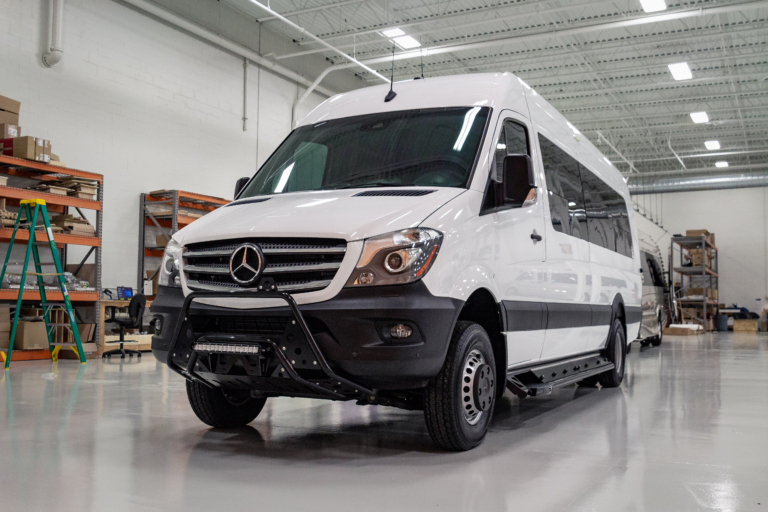 After the paperwork was completed, we looked to Frank and asked where do we begin? His first step was a quick tour inside to see what Baltas Vilkas looked like in person. The dropbox photos throughout the build process only made the entire wait harder to bear but the photos at least kept us informed on the progress. Stepping inside our RV was magical for the first time. Yes, the wild colored curtains, dark walls, light wood cabinets, recessed lights and padded floors all did come together. It is hard to describe the wonderment when one finally sees the finished product in person when one has had so much input in the selection process. Unlike any other buying experience I have ever had; it was truly breath taking to see something that we made detailed selections on. This is custom work and if I had any qualms about something, I knew it was our choice and not some mass assembly line where we could have whatever we wanted as long as it was from column A or column B and only came in one color. That is not what you experience at Advanced RV. Advanced RV is truly the Burger King of motorhomes, you get it your way and you are treated as a King. 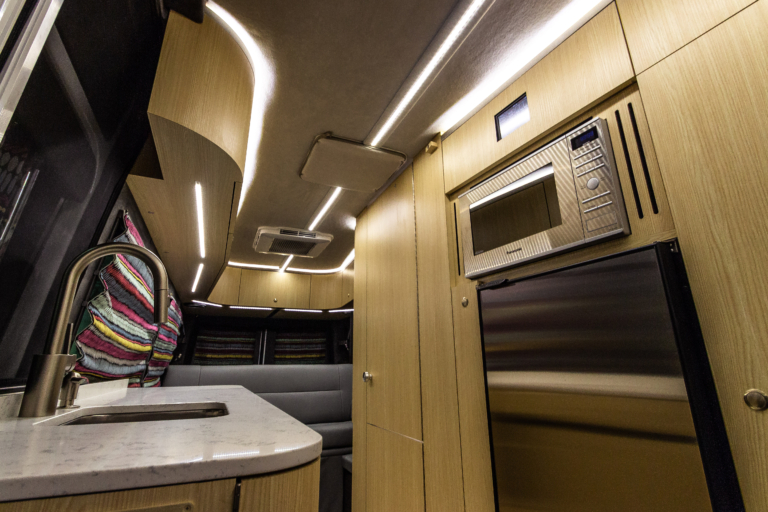 Frank’s official training started with a tour going all the way around the outside from front bumper and ending back at the starting point stopping along the way and explaining how each item on the underpart worked and giving us the hands-on experience on actually doing and not just observing.

Breaking for lunch gave us an opportunity to meet the owner of Radio Days a full time RVer who was having some work done at Advanced RV and another couple who had just added 8,000 miles on their RV as they travelled out west for Balloon Fest in Albuquerque and scheduled a new air condition installation and adding levelers to their unit. Meeting and speaking over lunch to these owners reaffirmed what so many people have told me that the RV community is friendly and helpful.

After lunch was the inside tour on reviewing systems, panels and manuals. It may seem overwhelming, but the most important part was the magical phone number written in red that was the 24-hour help line. Frank gave us some time to unpack our luggage and put things away and Janice delivered our drop shipped items, so we had a good foundation to start our overnight trip. As I put away personal items, I kept thinking that I never needed to repack any of these again if I did not want to. No more checking into a hotel and dragging luggage through the lobby only to repack in the morning and back track the luggage through the lobby. There were a lot of questions and by the end of the day I was asking my wife only one question… did we really do this?

At 4:00pm we felt confident enough to call it a day and embark on our maiden voyage, so we could develop a punch list and be able to come back on Monday with more informed questions. This is the recommended pick up process. Arrive on a Friday to get introduced to the beast and have a weekend maiden voyage to test out and experience the RV finishing with a list of questions and come back on Monday to do more training. Frank topped off our water tanks at the end of the day handed us the keys and pushed us out of the nest to learn to fly on our own.

Our heads were full of knowledge, manuals were accessible, tanks full, except black tank, so we were ready to hit the road. Driving out of the bay doors and onto the street we realized it was snowing and getting dark fast. The original plan was to travel a few hours to a nearby State park and start our new adventure of being RVer campers. Our first stop was for groceries around the corner at the Giant Eagle followed by a quiet dinner at some hanging plant restaurant where we could decide which park to go to or which Wal Mat to boon dock for the first night. After Nov. 1 most Ohio parks stop taking reservations and although many are open it is first come first take. This was Friday of Veterans Day weekend but with the cold and snow we figured our chance of scoring a spot was pretty good. We would arrive in the dark but the parks we were considering were open.

Deciding where to camp on our first night was not taken lightly. This was the start of a new adventure and we wanted it to be positive. A little background on state of mind and body. We were tired from learning so much new information on the systems and actual operations of Baltas Vilkas. We had been training all day and now it was dark and snowing. The night before our airplane had some mechanical problem and instead of arriving in Ohio at midnight on Thursday after my wife finished work, we arrived at 4:00am Friday morning. I knew it was either a very late-night flight arrival or a very early morning arrival when I noticed the Cinnabun concession stand on the concourse preparing parchment paper to bake their first round of breakfast buns. We were scheduled to meet at Advanced RV at 9:00am in the morning to start on Friday but I called ahead and asked if we could be 30 minutes late.

Now after all day training and dinner it was decision time. 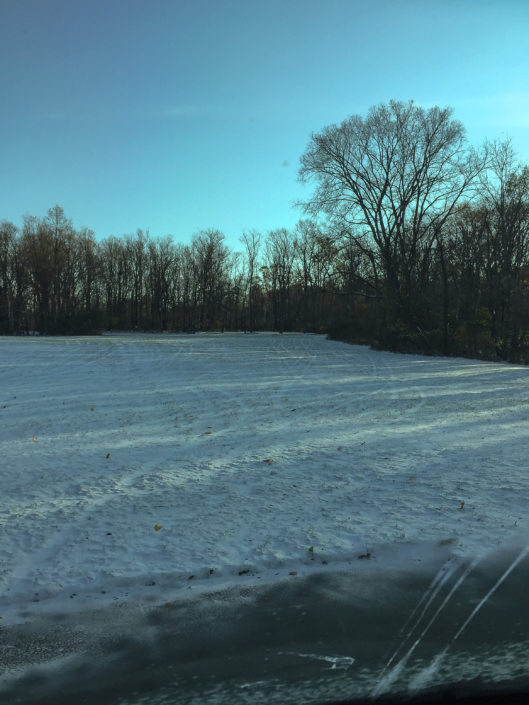 Wisely we drove back to my Brother in Laws house in the country 45 minutes outside of Cleveland and told him we would be staying in his driveway which over looked his pasture. Attached is the first sight the first morning, a snow-covered field. We called my Brother in Law and informed him we were 15 steps away from his kitchen entrance but with our 800-volt lithium battery pack and 4X4 traction we would be roughing it in the snow conditions and would have breakfast with his family in the morning.

Determining the temperature setting inside the cab for a night dropping to 19 degrees was a guessing game. We finally settled on 68 degrees cabin temperature for the night and with the RV Superbag we were very comfortable. It took some getting used to moving together in close quarters with setting up the bed for the first time, hanging the windshield privacy curtain, determining which light switch operated which lights and making sure not to unintentionally programing anything but being tired yet safe we managed to get to bed in short order. 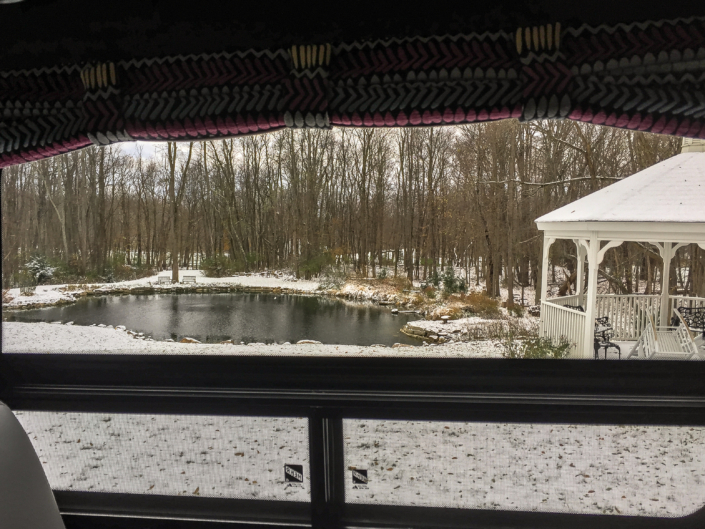 The next morning it was a thrill to wake up still warm inside our unit and having our own privacy in our own little cocoon. The first cup of coffee never tasted so good on a cold morning looking out the windows with about 2 inches of new snow and no schedule to keep. As I checked our status of systems on the Silverleaf all seemed in order until my wife pointed out that the gray tank was reading 100% full. This seemed strange since we had not used the shower or kitchen sink. Waiting until 9:00 I decided to call the help line and within a minute I received a call from none other than Frank. Asking me to push a couple of buttons and give him some reading he determined that one of our sensors was most likely experiencing some frozen water on it and giving a false reading. Given the cold and being a new system without any gray water in it froze but it was still safe to drive. Going on a short errand the readings dropped so it most likely was just a frozen sensor. Frank also explained some of the other issues I had but it was all operator error such as finding the proper control installed by Advanced RV and not Mercedes Benz seat warmer since our seats were custom. My take away is that the Help Desk number is responsive and I have confidence in it throwing me a life line.

We return to Advance RV on Monday and I am sure there will be more details to absorb but this is a mission I look forward to.