This is the first of a two-part series. Follow Morgan, a chemical engineer in the pollution abatement industry, as she travels in an Advanced RV to hike and work in power plants through the American West.

I arrived at Advanced RV around 3pm where I met with Viki to pick up Coche de Perros, my new home for the next 3 and a half weeks. I am a chemical engineer at Neundorfer and after seeing a few of ARV’s custom vans, I knew immediately van life was something I wanted to try out. So for this trip I planned on taking the RV not only on a road trip to hike and explore, but also to ten power plants as a working vehicle.

As soon as I saw the interior, I was shocked at how little I would need to change my lifestyle to “live” in the van. Nevertheless, I was still quite nervous to drive a vehicle of that size. Coming from my Honda Civic, how would I find parking in the city? Drive the mountains in the Tetons? Maneuver on small winding roads or even switch lanes during rush hour? 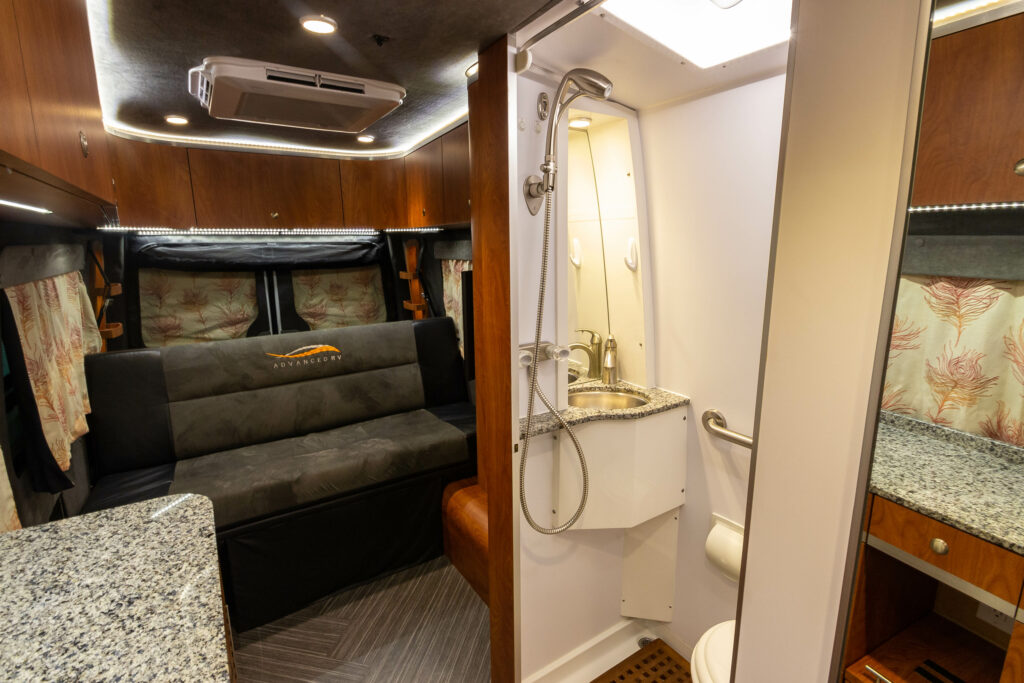 After receiving an informative training from Viki, I was off. I headed up to Minneapolis for the weekend to visit my college roommate. As I hit the road, some of my fears were put to rest because the RV was incredibly easy to drive. The Sprinter felt smooth and nimble, and I didn’t take up 3 highway lanes like I thought I would.

I had planned on spending the first night slightly north of Chicago, right on Lake Michigan. However, a late-running lab test meant an untimely start to the day. It was getting dark and I was hardly out of Indiana. I quickly found a campsite on iOverlander that usually had sites available and accepted walk-ins. Unfortunately, upon my arrival I found the site was full.

Verging on 10pm, I called the local casino, Blue Chip in Michigan City, and was told I could stay there. The casino’s RV lot had a few other RVs also staying there, 24hr security service, and lots of lighting. I felt a lot safer than I was expecting, especially with my vehicle’s motion-sensing lights and privacy curtains. I was exhausted from a full day of work and a 5-hour drive. I cracked open the windows and was out in minutes. 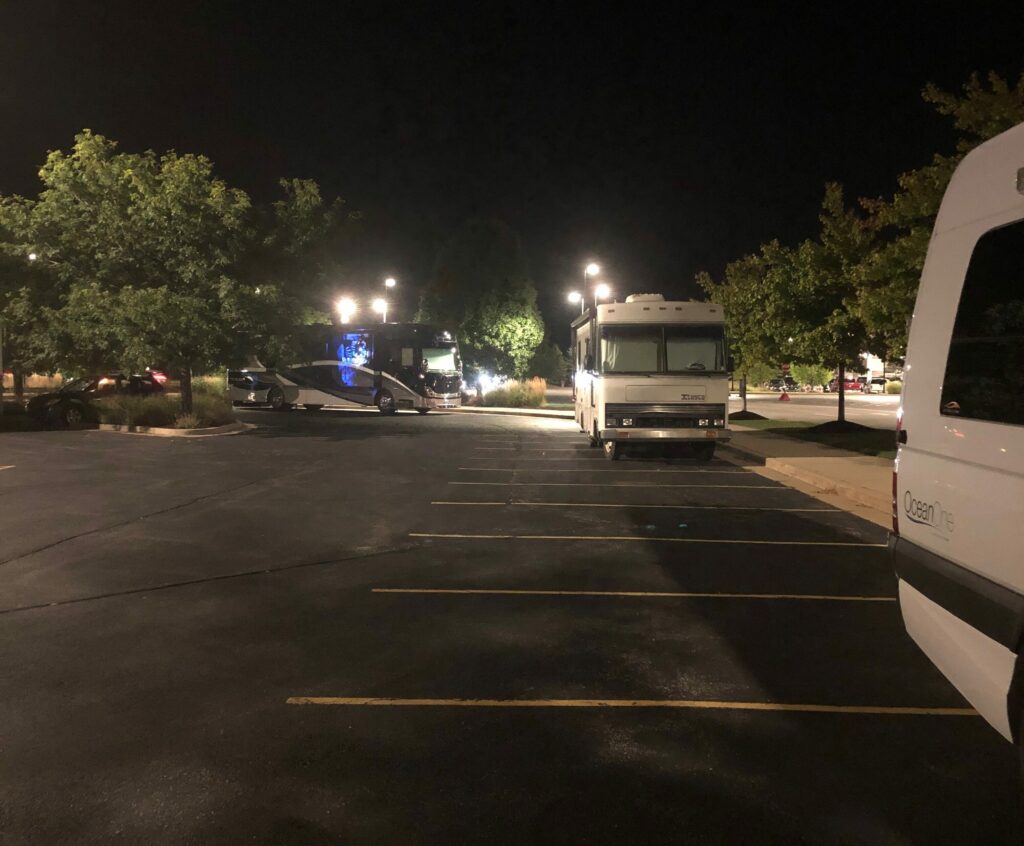 After a good night’s sleep, I made some coffee in the Keurig and started on my 7-hour drive to Minneapolis. With snacks and drinks in my fridge and a bathroom only a few feet away, the drive was painless… until I hit rush hour traffic between The Twin Cities.

In the sea of cars, the size of my RV initially caused some panic; but with its mirrors and traffic cameras I didn’t have a single issue. Fellow drivers were also very accommodating and would make room for me to switch lanes when needed.

Another concern was my friend’s downtown apartment. I wasn’t sure where I would park or how I would maneuver in a big city. Again, no issues. The van fit perfectly in the slightly oversized street parking spots right outside her place. Having driven Coche de Perros for a few days I was becoming confident behind the wheel. I didn’t feel like I had a million blind spots like I did right when I left Cleveland. I zipped around the city with ease.

Making good use of the privacy curtains, I left the RV there for the night as I enjoyed dinner, drinks, and mini golf with my friend. 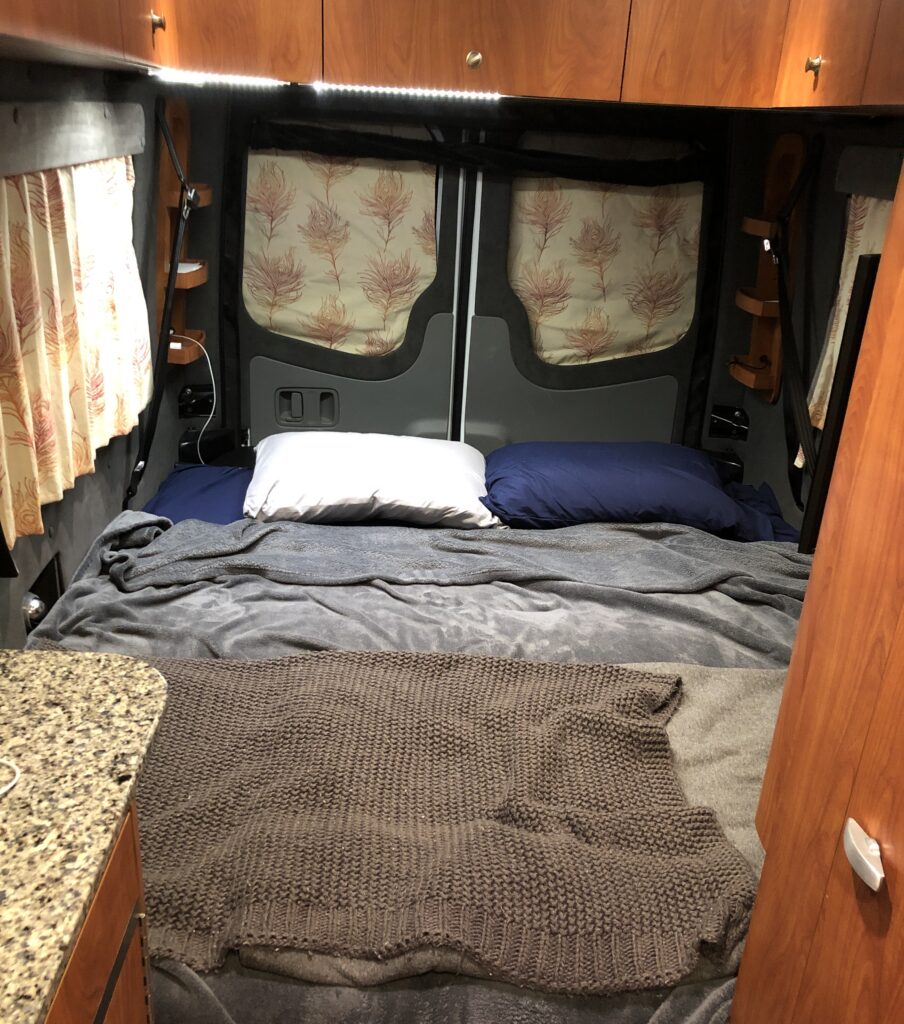 Next stop on the trip: Fargo, North Dakota.

Leaving Minneapolis, I knew I wouldn’t be driving for long. The Browns home opener was at noon. There was a Buffalo Wild Wings right off the exit, a perfect stop for lunch and football. Luckily I had my whole wardrobe with me and I was able to quickly change into some Browns attire and head inside.

After the game, I continued my drive up to Fargo and found my home at a local campsite a little south of downtown called Lindenwood Campground. There were bike rentals and lots of walking trails all around the park. My spot was right along the river which made for a beautiful view. My coworker suggested we dine at Izumi’s, a local sushi place that was a must-eat in Fargo. I didn’t expect much from a sushi restaurant in North Dakota, but I couldn’t have been more wrong. Izumi’s was excellent.

I drove back to the campground after dinner. It was dark, so I used my motion-sensing side lights to park the van (not their intended purpose, but it worked well). I turned on the heat, deployed the bed, and settled in for the evening. The temperature was about 50 degrees that night but with the heater on in the van I didn’t even notice it was chilly until I stepped out in the morning. 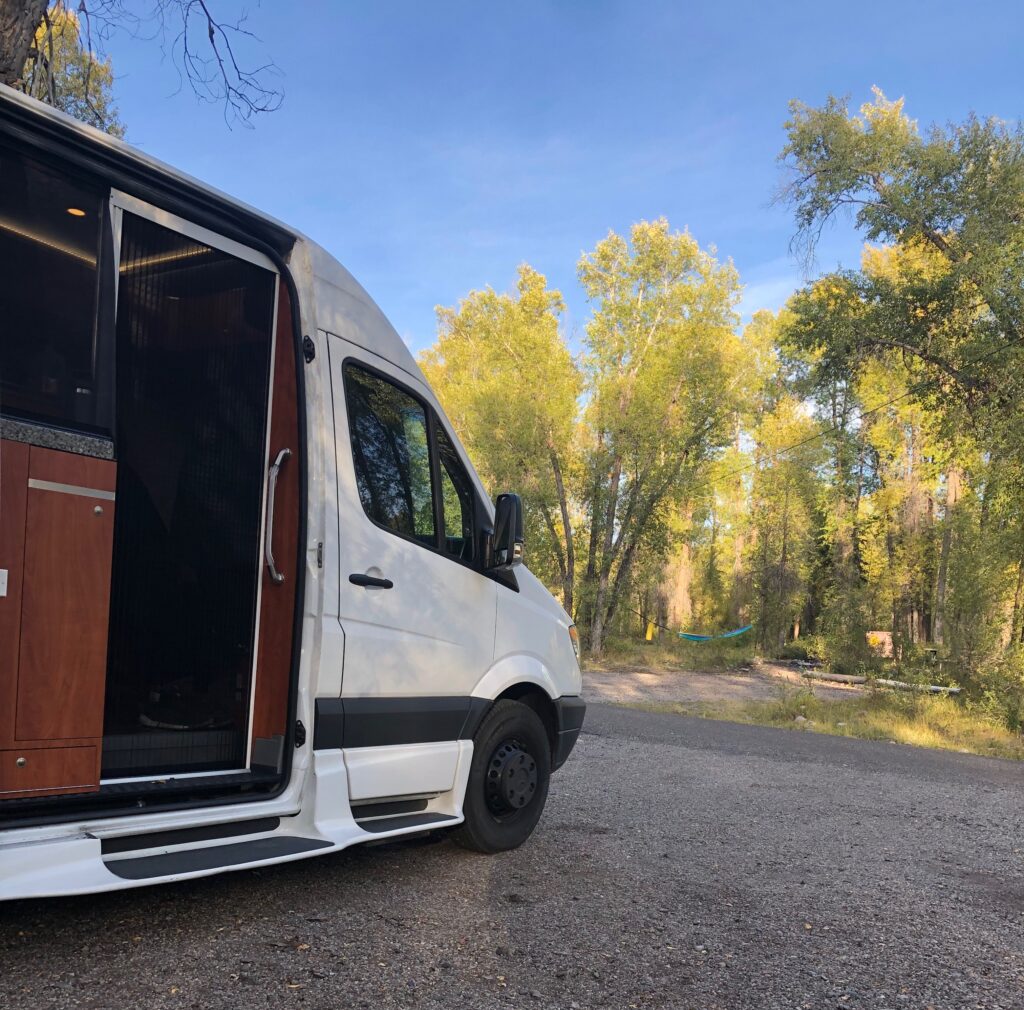 Following some much-needed sleep, I was ready to drive to the first worksite of my trip. I made myself a “pumpkin spice latte”, using the Keurig to make pumpkin spice coffee and my Nespresso milk frother to warm some almond milk. I enjoyed my latte on the 4-hour drive to Bismarck where I parked at the local Sigley Campground.

After working at the job location, I decided to get some activity in since I had been driving so much in the last few days. I attended a yoga class in downtown Bismarck and by the time I got back to the campsite I was starving and in need of a hot shower. I immediately turned on the water heaters and started to prepare dinner. By “prepare”, I mean I threw some lentil pasta, broccoli, and vegan meatballs into the Instapot I had brought with me. I hopped in the shower while everything cooked.

By the time I finished my shower, my food was cooked and ready to eat. I checked my tank levels, assuming that I’d need to refill freshwater after my shower. The meter read 75%… the shower used less than 10% of my water. I was surprised (and grateful) that I didn’t need to go out in the cold to fill up the tank. I ate my dinner and used the campsite WiFi to watch some Breaking Bad. It felt like a typical night in my Cleveland apartment. 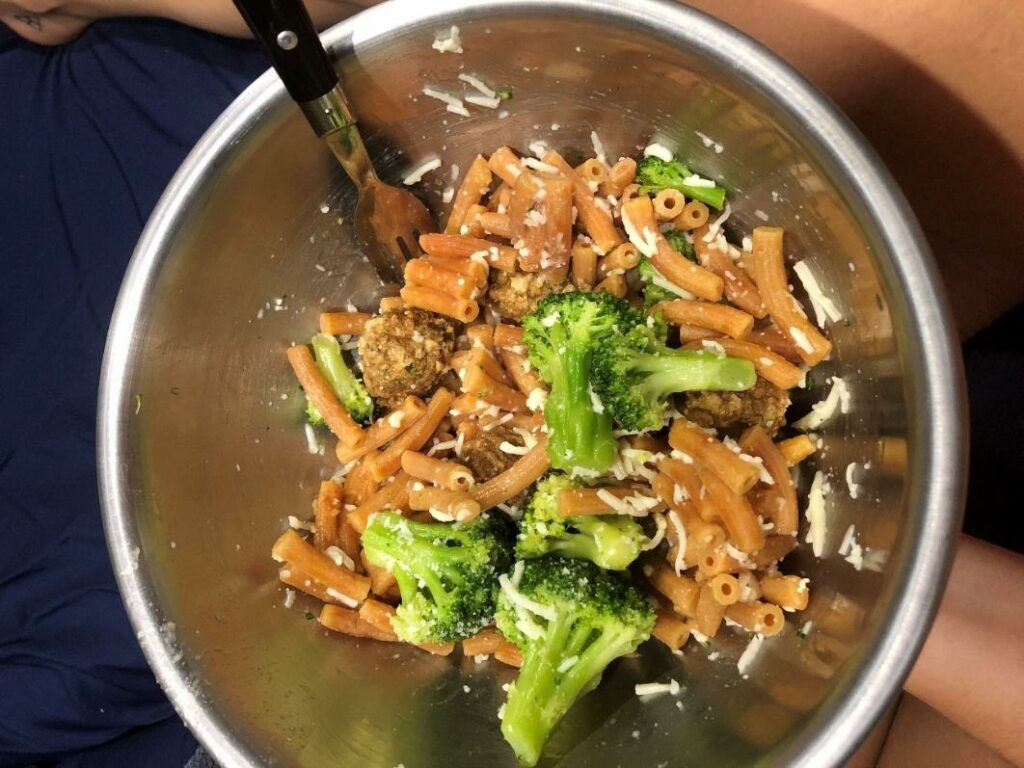 I spent the next couple days at power plants outside of Bismarck, meeting with our customers and installing our latest software on their computers. Driving the RV onsite was never an issue. In fact, it actually attracted plant workers. They all loved the idea of bringing an RV onsite and were stunned that there was a queen sized bed, kitchen, shower, and bathroom “all inside that little van.”

After my second site visit that week, I started making my way to Billings, Montana. My boyfriend, Marc, would be flying in the next day.

A 6-hour drive brought me to the Billings airport, where I picked up Marc. Needless to say I was easy to spot outside of the airport.

We ate a quick lunch in the city before driving south to Cody. We stopped at the local grocery store to pick up all the groceries we would need for a week of hiking. With the fridge, freezer, and all of the storage space available, we stored more food than I could fit in my small apartment back home. We were set for the week.

We finished our drive at the Bridge Bay campground in Yellowstone National Park. We showered and dug into our fridge, making chicken salads for dinner. The temperature dropped into the low 40s that night, a fact we quickly realized at 3am when we woke up absolutely freezing. We noticed we forgot to turn on the heat and raced for the Silverleaf control screen. In about 10 minutes the RV was nice and toasty and we went right back to sleep.

In the next installment, Morgan explores Yellowstone and the Grand Tetons. Stay tuned!